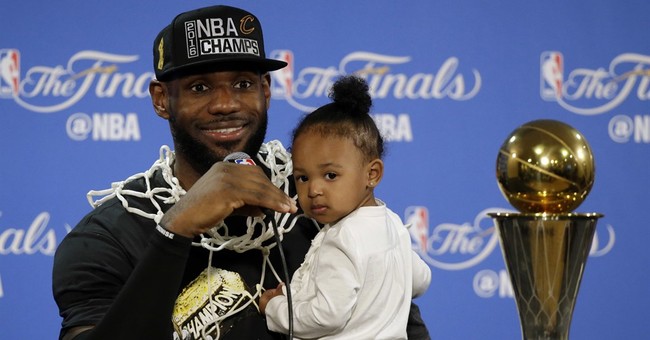 Basketball star LeBron James is on the cover of Sports Illustrated's "Sportsman of the Year" issue wearing a massive safety pin in opposition to President-elect Donald Trump. James was a high-profile supporter of Hillary Clinton and campaigned with her in his home state of Ohio shortly before the election.

LeBron James wore a safety pin on the cover of 'Sports Illustrated' https://t.co/zdMtInEtds

After Trump was elected, there was a brief effort to bring back the "safety pin" campaign that started after Brexit passed in the United Kingdom. The idea was that those who were against bigotry could wear a safety pin on their clothes as a symbol of their tolerance. The meme was criticized from both the left and from the right.

oh for crying out loud https://t.co/028fxXmacX

Lebron James is wearing a safety pin in his Sportsperson of the year photo! He's a really awesome ally to have. ???? #resist pic.twitter.com/qBp6I0oKLp

So LeBron James wore a safety pin to show support for those triggered by Trump’s election. Good Lord. #dbap pic.twitter.com/xkkf1ladOq

James was also the 2012 Sportsperson of the Year.