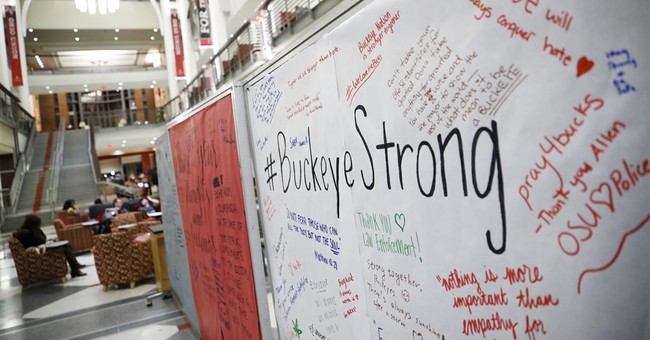 Given that an OSU administrator posted an oddly sympathetic Facebook post urging compassion for Abdul Razak Ali Artan, an Ohio State student who injured 11 people with a car and a knife before being shot dead, this shouldn't come as too much of a shock, but here it is: a student group at Ohio State is now mourning Artan as a person of color who is a victim of police violence.

The event began with the reading of a eulogy for all those who are on the list, a reading of the individuals’ names, ages and the location of their death, followed by a moment of silence.

“In some cases, the deceased may have committed acts of violence against others before they were killed. Perhaps they were domestic abusers, perhaps they threatened or killed others. This possibility is not something to shy away from. The protest against police brutality extends to the innocent and the guilty alike, because we know that no matter the crime, justice and due process don’t come from a cop’s bullet,” Abidi said while reading the eulogy.

Among the names on the list was Artan. Those in attendance said they did not condone his actions, but some said they have compassion for the attacker, who expressed feelings of anxiety related to how he was perceived as a Muslim.

“You can understand where an act of violence comes from without condoning that act of violence,” said Pranav Jani, an associate professor of English.

This begs the question: would these students have preferred that Artan not been shot by the police officer, but rather had been able to kill their classmates? Artan was an armed man on a rampage who had just run down a crowd of students. He had a "big-ass knife." ISIS took credit for the attack and Artan had posted "heated" messages on Facebook. He had reportedly purchased the knife days before the attack, so this was a carefully-planned event. Had the police officer not been nearby, innocent people would have died or been seriously injured. This shooting was not an act of police brutality, it was an act of heroism.

This is reminiscent of the time one of the Boston Marathon bombers was mourned by Mayor Bloomberg's group as a victim of gun violence. Thankfully, Mayors Against Illegal Guns had the common sense to realize that a terrorist fleeing police isn't a victim of anything, and apologized for including his name. It seems unlikely that Ohio State will follow their lead.