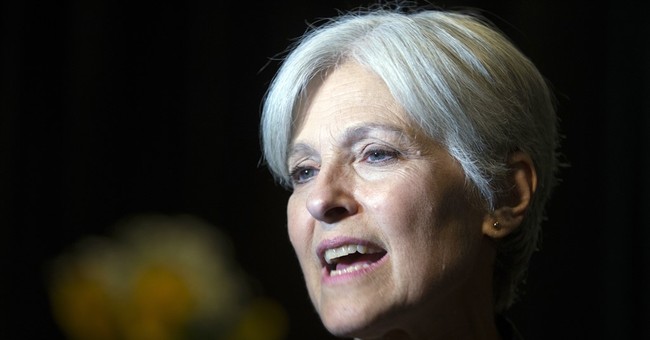 Matt wrote the yesterday about Green Party nominee Jill Stein's efforts to raise $2.5 million to ask for a recount in three states. Well, the money has been raised--twice over--and now Stein is trying to backpedal just a little bit. The goal of the fundraiser is now $7 million (which is more than the recount effort should cost), and the fine print of the site is saying that there is no guarantee that a recount will actually happen.

We cannot guarantee a recount will happen in any of these states we are targeting. We can only pledge we will demand recounts in those states.

If we raise more than what’s needed, the surplus will also go toward election integrity efforts and to promote voting system reform.

Stein has also changed the amount needed for lawyer's fees:

For what it's worth, there's absolutely zero evidence of any sort of voter fraud or manipulation with the machines. (Especially in Michigan, which uses only paper ballots.) This whole thing looks to be a massive scam to raise money for the Green Party under the guise of ousting Trump--and it's one that many people fell for hook, line, and sinker.

Paid Leave is Going to Be Gone from Democrats' Spending Bill
Rebecca Downs
Joe Manchin Is the Grim Reaper for Most of the Left's Agenda Items...And He Just Killed Another One
Matt Vespa
One of the Big Lies In the Kyle Rittenhouse Case
Julio Rosas
Sen. Marsha Blackburn: Biden's Vaccine Mandate Is 'Overreach,' Moving Us to 'Socialist Agenda'
Rebecca Downs
A State Senate Votes to Overturn Parental Notification for Minors' Abortions