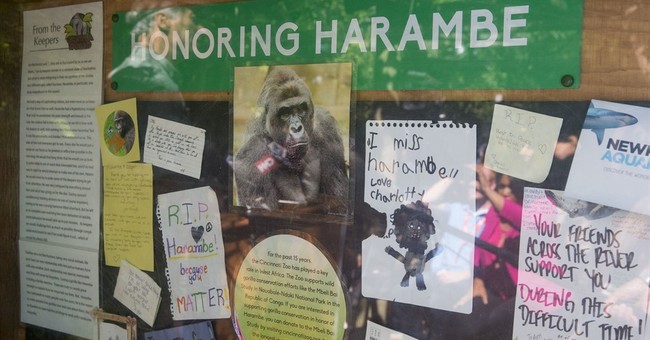 The University of Massachusetts Amherst just killed Harambe all over again. Harambe jokes, that is.

Since his most untimely death at the hands of a zookeeper in March after a toddler entered the gorilla enclosure, Harambe has become an internet sensation. He's been included in presidential polls, appeared on shirts, been the subject of song parodies, and presidential candidates have released statements about him. It's nearly impossible to go anywhere on the internet without seeing something Harambe-related.

However, none of this matters to two industrious resident assistants at the University of Massachusetts, who have emailed their "first years" (guessing "freshman" is too sexist too) warning them that use of Harambe memes or making Harambe jokes is racist and potentially constitutes sexual assault. (A popular offshoot of the Harambe meme is saying that a person is going to expose the slang word for male genitalia "for Harambe.")

According to the RAs, Harambe jokes are racist because there is a residential community for African-American students at UMass named "Harambee," which is a Swahili word. The RAs say that any joke concerning Harambe (the gorilla) is a "direct attack" on this community.

Granted, there's no way this puts a stop to Harambe jokes on campus. The Cincinnati Zoo politely asked people to cut it out with the jokes, and the internet responded by printing up more shirts and filming more videos and making more signs for ESPN'S College GameDay. This will probably have a similar effect.