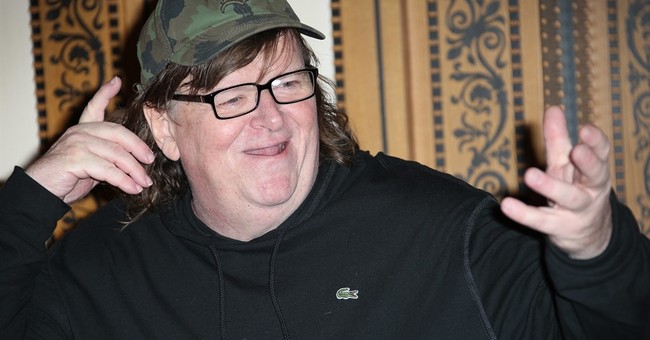 About three weeks after admitting on "Real Time With Bill Maher" that he thinks Trump will win, filmmaker Michael Moore has changed his tune: he now thinks Trump is actively trying to sabotage his campaign because he never actually planned on being president.

According to Moore, Trump's "subdued" speech after winning the New Jersey primary was when he started to realize that he could actually walk away with the Republican nomination. Moore thinks that Trump never wanted to be president, and only ran for in order to get a leg up in negotiations with NBC for The Apprentice--which backfired when NBC promptly fired him.

Moore's theory is that Trump is preparing to exit the race to avoid losing in November.

But, let me throw out another theory, one that assumes that Trump isn’t as dumb or crazy as he looks. Maybe the meltdown of the past three weeks was no accident. Maybe it’s all part of his new strategy to get the hell out of a race he never intended to see through to its end anyway. Because, unless he is just “crazy,” the only explanation for the unusual ramping up, day after day, of one disgustingly reckless statement after another is that he’s doing it consciously (or subconsciously) so that he’ll have to bow out or blame “others” for forcing him out. Many now are sensing the end game here because they know Trump seriously doesn’t want to do the actual job — and, most importantly, he cannot and WILL NOT suffer through being officially and legally declared a loser — LOSER! — on the night of November 8th.

Trust me, I’ve met the guy. Spent an afternoon with him. He would rather invite the Clintons AND the Obamas to his next wedding than have that scarlet letter (“L”) branded on his forehead seconds after the last polls have closed on that night, the evening of the final episode of the permanently cancelled Donald Trump Sh**-Show.

Guess we'll have to stay tuned to see if Moore's theory plays out.