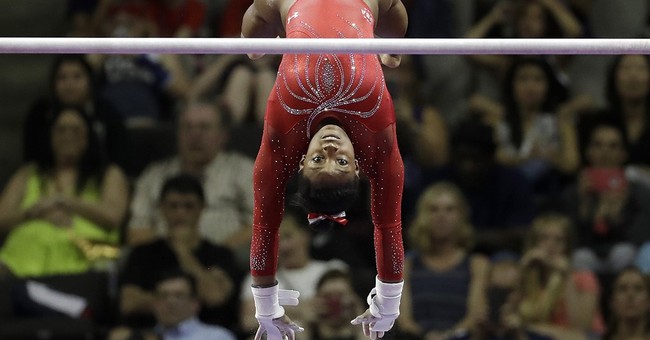 Gymnast Simone Biles may be on top of the gymnastics world now, but she didn't have the easiest road getting there. When Simone was three years old, she and her siblings were taken away from their mother, who was struggling with drug and alcohol addictions. After a brief stint in foster care, Simone and her sister Adria moved in with their maternal grandfather, Ron, and his wife Nellie. Three years later, Ron and Nellie officially adopted the girls. Simone calls Ron and Nellie "mom" and "dad," and Nellie is featured prominently in a Proctor & Gamble "Raising an Olympian" commercial.

By all accounts, it should be fairly obvious that Ron and Nellie Biles are indeed Simone's parents. This is clear to almost everyone--with the exception of NBC commentator Al Trautwig. After being confronted on Twitter for his repeated reference to Ron and Nellie as Simone's "grandparents," Trautwig had this to say in a (since deleted) reply:

@AlTrautwig actually they are her parents.

("Aimee B" aka @Salto_coach is Simone's longtime coach and the current head coach of Team USA.)

First off: A) rude and b) how in the world could he think this was an okay thing to tweet?

Simone refers to Ron and Nellie as her parents. They legally are her parents. This is the definition of adoption. Not all families have to be blood related.

Trautwig owes an apology not only to the Biles family, but to adoptees everywhere. His comments were incredibly insensitive, and factually inaccurate. This shouldn't have to be discussed.