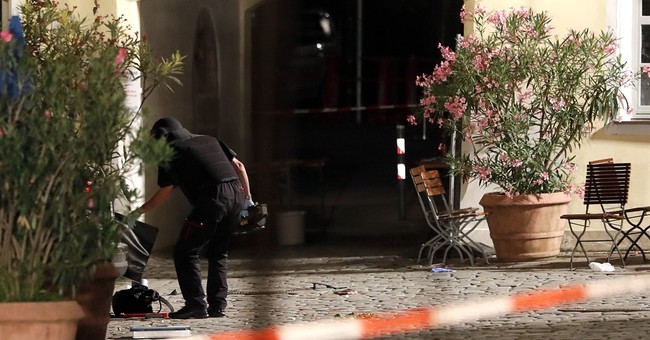 The suicide bomber who blew himself up at a music festival in Ansbach, Germany on Sunday was a 27-year-old Syrian who had been denied asylum in Germany back in 2015, yet was permitted to stay in the country and was provided an apartment to live in due to the current situation in Syria.

Twelve people were injured in the attack, which occurred late Sunday evening. The bomber was the only fatality, although officials say the backpack bomb he carried had the potential to kill many people. The bomber ignited the bomb when he was not allowed in to the music festival when he did not have a ticket.

A failed asylum seeker from Syria killed himself and injured 12 other people after setting off a bomb near an open-air music festival in the German city of Ansbach, officials say.

Bavaria's interior minister said the 27-year-old man detonated a backpack device after being refused entry to the festival in the southern city.

About 2,500 people were evacuated from the venue after the explosion.

It is the third attack in the state of Bavaria in a week.

Three of the 12 people injured are in serious condition.