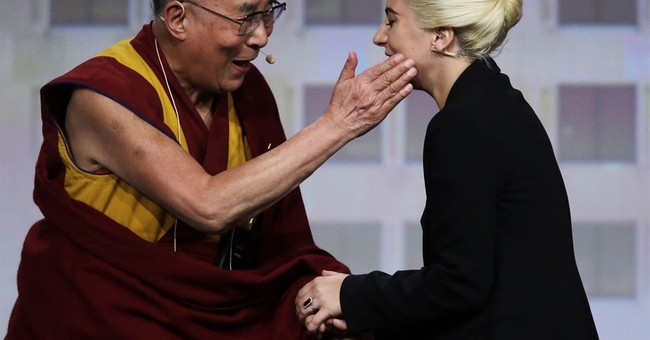 Singer Lady Gaga has set off a bit of a firestorm in China after she posted a picture on Instagram of herself and the Dalai Lama. Lady Gaga, whose birth name is Stefani Germanotta, spoke with the Dalai Lama on the topics of hope and kindness at the U.S. Conference of Mayors in Indianapolis.

"Hope is essential to keep the world going." - His Holiness the Dalai Lama #withcompassion #usmc2016 #kindyouth

Over in China, however, people were not so thrilled. The singer has reportedly been banned from the country, but government officials are being relatively mum on this. If her music is actually banned, she'd hardly be the first musician to be prohibited from entering China.

Chinese websites and media organisations were ordered to stop uploading or distributing her songs in a sign of Beijing’s irritation, the newspaper said.

The propaganda department also issued orders for party-controlled news outlets such as state broadcaster CCTV and newspapers the People’s Daily and the Global Times to condemn the meeting.

Additionally, Lady Gaga's angered Chinese fans spammed her Instagram account and posted on the Chinese social network Weibo commenting that they would no longer listen to her music as they were furious at her. Others said that Lady Gaga's meeting with the Dalai Lama "hurts a lot" and that they were disappointed with the singer.

The Dalai Lama has been exiled from China since 1959. Lady Gaga has never performed on the Chinese mainland, but has done concerts in both Hong Kong and Macau.