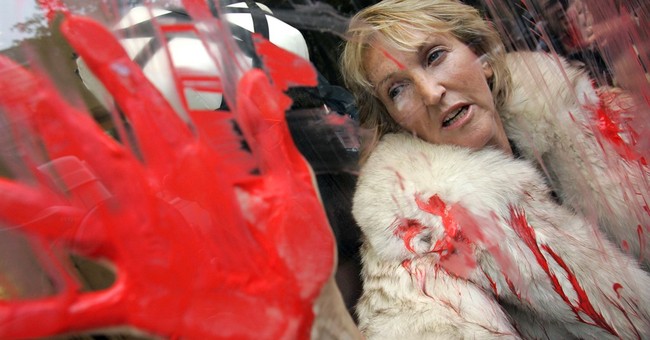 “Discrimination is discrimination, and it’s wrong, whether you’re a woman or a chicken,” - PETA President Ingrid Newkirk #StateOfWomen

Naturally, women weren't too thrilled to be compared to poultry. PETA, however, was not about to walk back their absurd claim, and has dedicated its Twitter account to calling people "bullies" for daring to say that they value women more than chicken.

@AsheSchow Easy to be a bully. Chickens are gentle/deserve kindness as much as we do. See HBO’s I Am An Animal https://t.co/lbzoYVhkO6

i cannot with this https://t.co/DxBPOeXOqJ

@mcbinch Chickens don't need the right to vote, they need equal consideration of their interests.

@Dinahsturtle Or did we just point out that chicken shouldn't be discriminated against? (Hint: it was the latter)

@HPCBrewer Never being born is preferable to a short life filled with suffering and misery.

Granted, Newkirk is no stranger to controversy for controversy's sake--she once wrote how she'd like to be barbecued after her death and turned into a purse.

Still, it's pretty absurd to compare women and chickens--and even moreso to defend this comparison.