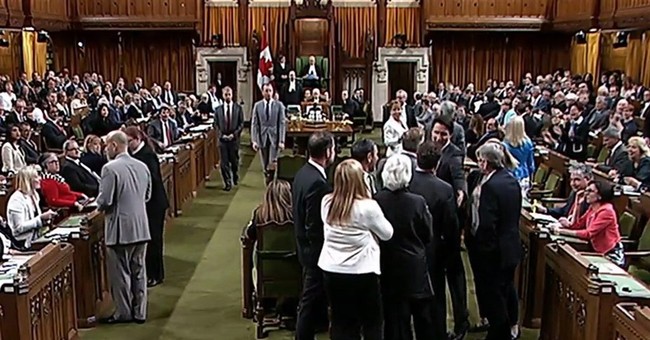 Canadian Prime Minister Justin Trudeau has apologized after elbowing a member of the New Democratic Party in the chest. Trudeau was also accused of telling another MP to "get the f-ck out of [his] way" during the incident.

The Prime Minister has been accused of "manhandling" a MP in the House of Commons. https://t.co/qrU0zYH9LZ #cdnpolihttps://t.co/qwaDHQPAK8

Ruth Ellen Brosseau, from Canada’s New Democratic Party, said she was elbowed in the chest by the prime minister. “I had to leave,” she said. “It was very overwhelming.”

Mr. Trudeau immediately stood up in the legislature to apologize to Ms. Brosseau.

“I want to be able to express directly to her my apologies for my behavior and my actions, unreservedly,” Mr. Trudeau told the legislature.

Mr. Trudeau said his intent was to hurry along the voting process and that the Conservative lawmaker appeared impeded from getting to his seat.

“I took it upon myself to go and assist him forward, which was, I now see, unadvisable as a course of action, and resulted in physical contact in the legislature, which we can all accept was unacceptable.”

Let's hope Trudeau has learned his lesson and keeps his hands to himself in the future. Ottawa may be home to the Senators, but the floor of Parliament isn't an ice rink.