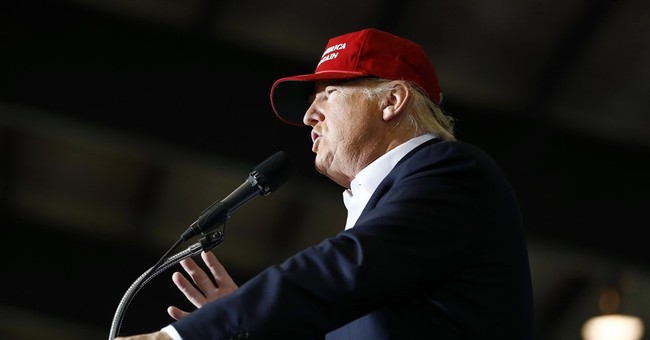 Republican frontrunner Donald Trump delighted Rhode Islanders at a rally in Warwick on Monday when he declared that the NFL needs to "Leave Tom Brady alone."

Earlier in the day, the U.S. Appeals court ruled that Brady had to serve a four-game suspension due to the "Deflategate" controversy. Brady and Trump have been friends for a while, and Brady briefly endorsed Trump for president.

Some other gems from the rally:

Trump on John Kasich: "I have never seen a human being eat in such a disgusting fashion" pic.twitter.com/AA6PDq9Mn5

.@realDonaldTrump says he might give up Tweeting if he's president pic.twitter.com/IIx8Rm0OG6

.@realDonaldTrump to supporters yelling 'build that wall': "It will be built." pic.twitter.com/NIFwtO682I

On the protesters that frequently disrupted the rally:

.@realDonaldTrump on protesters: “I actually believe that they do not love our country.” pic.twitter.com/LJU4CUG4yz

Overall, Trump was very well-received in the Ocean State, and he's on track to do very well there on Tuesday. Rhode Island doesn't have a ton of delegates, but as we've seen in recent weeks, every delegate counts.