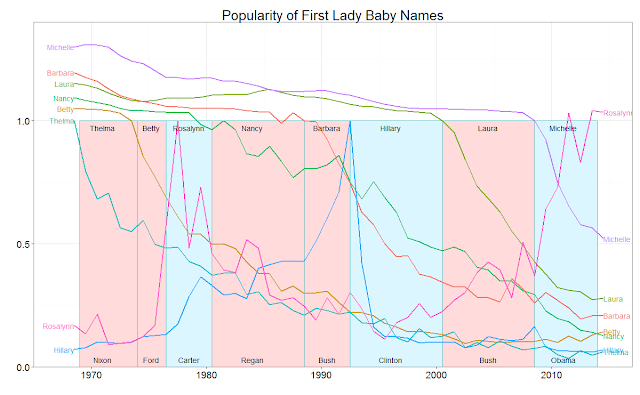 When we look at Figure 1 we can see that naming popularity seems to be heavily affected by First Ladies. Most names experienced a steady downward trend in popularity. The name "Rosalynn" is an exception as it peaked in popularity during the Carter administration before falling by the end to have risen in popularity once again.

While this is certainly quite silly and doesn't necessarily mean anything, it's strange to think about how many American girls could have potentially been named Hillary if Bill Clinton had lost the 1992 election. Additionally, it would be curious to see if "Melania," "Jane," "Heidi" or "Jeanette" (the spouses of Donald Trump, Bernie Sanders, Ted Cruz, and Marco Rubio, respectively) experience a surge or drop in popularity in the coming years if their husbands are elected.