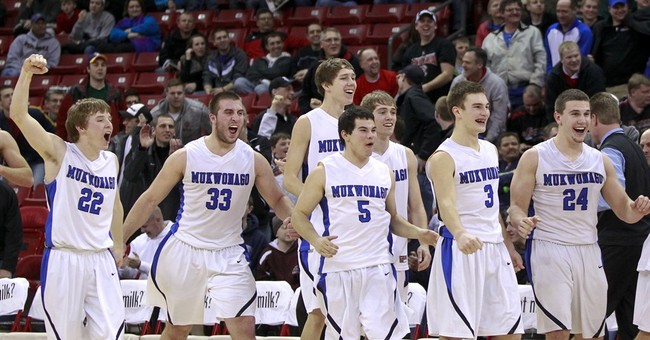 The Wisconsin Interscholastic Athletic Association, which governs high school sports in the state of Wisconsin, is officially the fun police. In an email sent out in December that is just now making news, the WIAA has banned several innocuous (and common) phrases from being chanted. Phrases such as "You can't do that" and "air ball" are now verboten.

In an email sent out to students in December, which was obtained by the Post-Crescent, the WIAA banned “chants by student sections directed at opponents and/or opponents’ supporters that are clearly intended to disrespect.”

The following words were reportedly included as examples:

While the email was sent in December, it became publicized after a basketball player was suspended for tweeting criticism of the new rules.

This is absurd. Some of my fondest memories from high school were supporting my high school at sporting events--from the heartbreaking double-OT losses to huge state championship wins. Part of the fun was chanting things at the opposing team and opposing crowd. It was all in good fun, and other crowds certainly responded back with jabs of their own. If a person has reached high school level competition and cannot emotionally handle "sieve" or "air ball" being chanted, they likely won't have much of a future in athletics. I was a two-sport athlete in high school, and hearing a loud crowd is more motivating than anything else--regardless of what is actually being chanted.

While some chants are certainly inappropriate and should be discouraged or banned, "scoreboard" and "we can't hear you" definitely don't fall under this category. Are students supposed to sit quietly among each other during the game and not make any noise? What's next, saying that celebrating during goals and baskets is bad because it might make the other team feel bad? This is a ridiculously slippery slope, and shame on the WIAA for this new policy. Not everyone can win in sports. A blanket ban on chanting incredibly mild chants is a terrible idea and is political correctness at its worst.