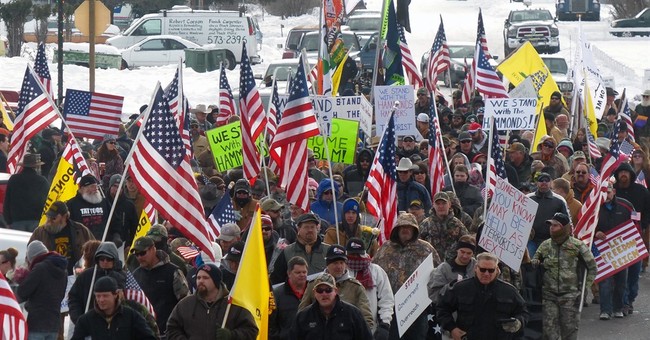 A group of armed protestors began occupying a federal building in a federal wildlife refuge in Oregon last night, following a rally in support of two ranchers who were convicted of arson. While no shots have been fired and nobody is injured, the group is saying that they will stay for "as long as it takes."

The group's spokesman is Ammon Bundy, son of Cliven Bundy, who made news in 2014 when a stand-off between himself and the federal government.

After the march Saturday, the armed protesters broke into the refuge's unoccupied building and refused to leave. Officials have said there are no government employees in the building.

"We will be here as long as it takes," Bundy said. "We have no intentions of using force upon anyone, (but) if force is used against us, we would defend ourselves."

Ammon Bundy said that the group in Oregon was armed, but that he would not describe it as a militia. He declined to say how many people were with him, telling CNN on Sunday that giving that information might jeopardize "operational security."

"We are not terrorists," Ammon Bundy said. "We are concerned citizens and realize we have to act if we want to pass along anything to our children."

The hashtag #OregonUnderAttack was the top trending topic in the United States on Sunday. Many noted the disparities in media coverage between this occupation and other riots.

This post may be updated as the story develops.

A Lot of Health Care Workers Are Refusing to Get the COVID Vaccine...The Reasons Are Not Shocking.
Townhall
An unmasked President Biden tells reporters 'in all probability' we'll have more Covid restrictions
Twitchy
Texas Democrats Finally Begin to Realize They Are Screwed
Redstate
BREAKING: CDC Director Says Biden Admin Is Considering a Vaccine Mandate
PJ Media