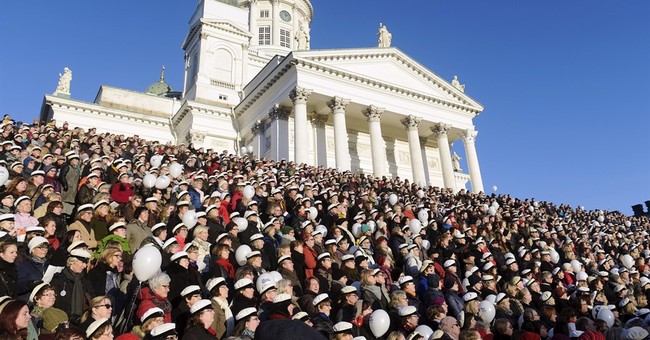 The Nordic nation of Finland is proposing something drastically different from the status quo to help fix its staggering unemployment rate: they're planning on eliminating all welfare benefits, and instead issuing everyone a tax-free monthly salary of 800 euros (about $870) regardless of current income.

Finland's government is drawing up plans to give every one of its citizens a basic income of 800 euros (£576) a month and scrap benefits altogether.

A poll commissioned by the agency planning the proposal, the Finnish Social Insurance Institute, showed 69% supported the basic income plan.

Prime Minister Juha Sipila was quote by QZ as backing the idea.

“For me, a basic income means simplifying the social security system,” he said.

The proposal would entitle each Finn to 800 euros tax free each month, which according to Bloomberg, would cost the government 52.2 billion euros a year.

The idea is that if people had some kind of income security, rather than a variety of benefits programs, people will search for and take a job rather than sit at home. The concept of a "welfare cliff"--that is, the amount of money a person would have to earn per year to make employment more profitable than collecting benefits--is a real concept and is contributing to Finland's relatively high unemployment rate. Right now, a person is effectively punished with the loss of benefits for taking a low-paying job--with a universal income, this "punishment" would be eliminated and would encourage people to work.

In the grand scheme of things, 800 euros isn't all that much--the cost of living in Finland is relatively high. The median salary of Finland is 3,000 euros per month--so it's not like the universal basic income would make people millionaires. While it's still very early in the planning process (the full proposal won't be out until November of 2016), I think anything that streamlines and simplifies the welfare state and doesn't disincentivize work is a good thing.