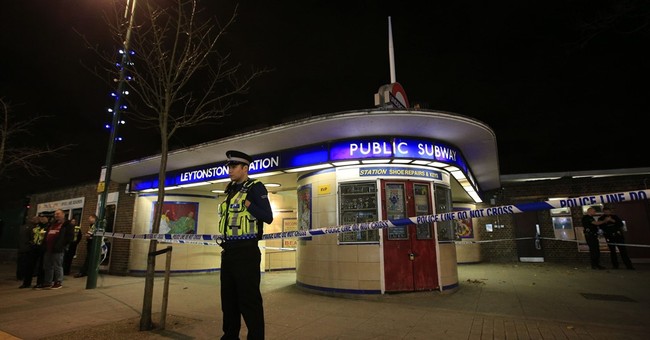 Three people were stabbed yesterday in a random, unprovoked attack in an east London Tube station. The Metropolitan Police said that they are investigating the knife attack as a "terrorist incident." There were reports that the assailant yelled "This is for Syria" during his attack.

The assailant, 29, was subdued with a stun gun and arrested on suspicion of attempted murder at 7:14 p.m. Saturday in the suburb of Leytonstone, London's Metropolitan Police said.

Police had been dispatched to the station after receiving emergency calls reporting that a man had stabbed people and was threatening others, police said. The man threatened officers as they tried to reason with him, a statement said.

Police are looking into reports that the suspect yelled, "This is for Syria," during the attack, said Chioma Dijeh, a spokeswoman for the Metropolitan Police.

One man, 56, suffered serious knife injuries in the attack and was taken to an east London hospital, where he remains in a stable condition. His injuries are not considered life-threatening, police said.

A hashtag, #YouAintNoMuslimBruv, which an onlooker yelled at the attacker, trended on Twitter for much of the day Saturday and Sunday.

The public has been urged to "remain calm, but alert and vigilant" with the possibility of more random attacks.