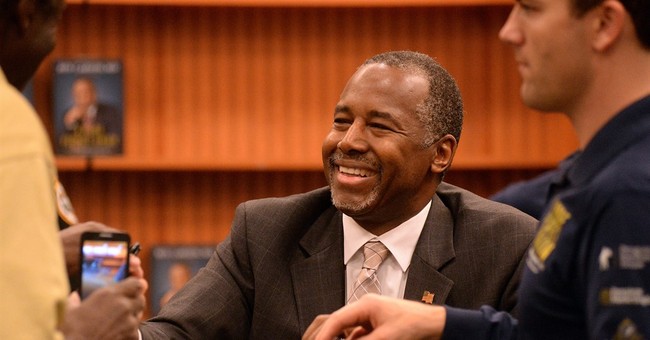 UPDATE: Since Politico's piece was published, many journalists have been questioning their reporting and the angle they took with the story. Stay tuned for further analysis about this admittedly quite strange turn of events.

Dr. Ben Carson's campaign admitted on Friday that his story, told in his autobiography Gifted Hands, about turning down a scholarship offer to West Point was a lie. Carson never applied to the U.S. Military Academy.

West Point, however, has no record of Carson applying, much less being extended admission.

When presented with this evidence, Carson’s campaign conceded the story was false.

This, my friends, is the very definition of an "unforced error."

Carson's life story was already inspiring enough without any need for embellishment. He grew up in poverty. He was the top ROTC student in the city of Detroit, and graduated from Yale and the University of Michigan. He had a successful career in neurosurgery at Johns Hopkins, and, as we all know, was the first to successfully separate conjoined twins who were joined at the head. These are all incredibly impressive things in their own right, and it's absolutely befuddling as to why he felt he had to enhance his story even further.

This is the latest in a series of allegations that Carson has not been entirely truthful about his background. And frankly, things are not looking good for him, even though he is currently leading in several national polls.

It will be very interesting to see how the Carson campaign is able to bounce back from this. A person who runs for president needs to be fully aware that their background will be scrutinized--and mistakes like these are simply unacceptable this late in the game.

UPDATE: Per Benjy Sarlin of MSNBC, here are a collection of Ben Carson's past statements regarding West Point.

So, without comment, here's Carson's West Point story to NYT (today), to Charlie Rose (Oct), and on Facebook (Aug). pic.twitter.com/1kbIhpEj5r

UPDATE: Politico has adjusted their headline and lede to remove claims that Carson "fabricated" or lied about his past. As such, I've adjusted mine.