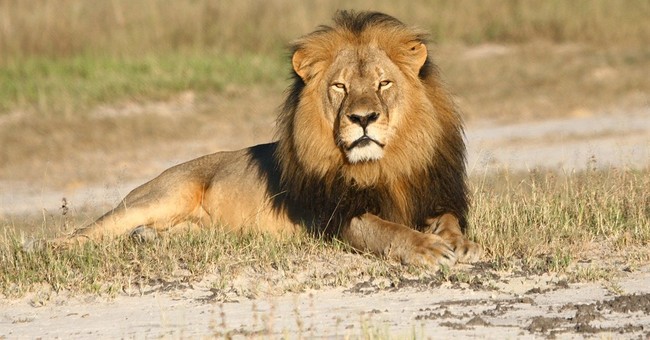 Goodwell Nzou, a Zimbabwean student studying in the United States, has a message for Americans in today’s New York Times: Zimbabweans don't give a hoot about Cecil the lion.In short, Nzou says that Zimbabweans had no special affection for Cecil (or any particular lion), and are at a constant risk of being killed or maimed by them on a daily basis. Nobody cares that he was killed, and the western media is making a huge deal out of something insignificant.

From the piece: (emphasis added)

Cecil who? I wondered. When I turned on the news and discovered that the messages were about a lion killed by an American dentist, the village boy inside me instinctively cheered: One lion fewer to menace families like mine.

My excitement was doused when I realized that the lion killer was being painted as the villain. I faced the starkest cultural contradiction I’d experienced during my five years studying in the United States.

Did all those Americans signing petitions understand that lions actually kill people? That all the talk about Cecil being “beloved” or a “local favorite” was media hype? Did Jimmy Kimmel choke up because Cecil was murdered or because he confused him with Simba from “The Lion King”?

In my village in Zimbabwe, surrounded by wildlife conservation areas, no lion has ever been beloved, or granted an affectionate nickname. They are objects of terror.

Nzou isn’t the only Zimbabwean who feels rather “meh” about the whole incident. It’s been pretty widely reported that Americans were far more upset about this than people who actually live in Zimbabwe.

Since Cecil was hunted, many airlines have banned the transport of trophy animals. (This ban is more symbolic than anything else for some airlines—American Airlines, which doesn’t go to Africa, was quick to jump on the “banning” bandwagon, for instance.)

It should also be noted that Robert Mugabe, the corrupt dictator ruling Zimbabwe, slaughtered and ate a baby elephant for his birthday feast—and received a gift of a stuffed lion only a few months ago. There was minimal outrage over this, despite the fact that a dictator of one of the world’s poorest countries threw himself a lavish party that sounded like something out of an Onion article.

I don't have many strong feelings regarding Cecil the lion. Apparently Zimbabweans don't either.

Former Minister of Truth Blames Disinformation for Pushing Her Out of DHS
Julio Rosas
Hidin' Biden Goes 100 Days Without an Interview
Spencer Brown
Nicolle Wallace's Plea for Laws Against 'Illegal Guns' Is Peak MSM Lunacy
Spencer Brown
NYT: Enrollment in Public Schools Has Dropped by 1.2 Million Since the Pandemic, But We're Not Sure Why
Guy Benson
White House Responds to Pro-Life Oklahoma Bill Banning Abortion at Conception
Madeline Leesman