Pope Francis Not Too Thrilled With Hammer and Sickle Crucifix Gift 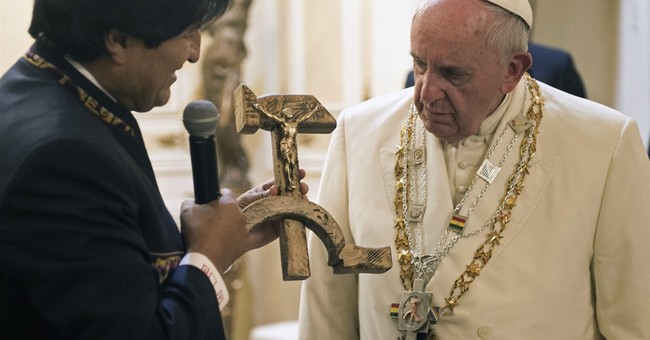 Pope Francis, who is currently on a tour of South America, was not too thrilled to receive a gift of a hammer and sickle "crucifix" from Bolivian president Evo Morales. Upon being presented with the gift, the Bishop of Rome shook his head and said "that's not right" and appeared to politely reject the item.

(The original English video was made private, but the extended, Spanish version remains online.)

The "crucifix" consisted of a figure of Jesus nailed to the hammer part of the hammer and sickle in lieu of a cross. Morales is a founder and member of the political party Movement Toward Socialism.

An image of Pope Francis' bewildered expression upon receipt of the gift quickly went viral on Facebook.

The look of disapproval from the Pope in the video... He shakes his head and says "That's not right." Awkward...https://www.youtube.com/watch?t=14&v=CyGsB3c5oKk

In 1949, Pope Pius XII issued the Decree Against Communism, which automatically excommunicated any members of the Church who were members of communist political parties or sympathizers of communism.

It's incredibly tacky and borderline heretical to tack an image of Jesus Christ to a symbol of regimes that killed and persecuted millions of Christians. The stated goal of the USSR, which had a hammer and sickle pretty prominently on its flag, was to eliminate religion and create an atheist society. The crucifix is a portrayal of the redemptive act of Christ dying on the cross for the sins of mankind, not something to be twisted into a perverse political symbol.