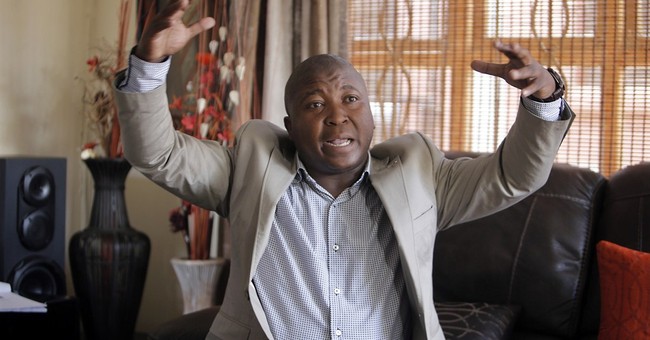 Thamsanqa Jantjie, the fraudulent sign language interpreter at Nelson Mandela's funeral, was involved in the necklacing deaths of two men in 2003, according to one of his relatives. He was not tried for the killings because he was found mentally unsuitable for trial.

"Necklacing" involves killing someone via placing a gasoline-filled tire around the neck and torso of a person and lighting said tire on fire.

Jantije spent over a year in a mental institution and reportedly was hallucinating during his "translation" of the memorial service. At one point, he stood about a yard away from President Obama.

This story just keeps getting more bizarre by the day. It is absolutely horrific that the South African government allowed someone with essentially no sign language skills, severe mental illness, and a history of horrific violence to appear prominently on stage next to world leaders. While I'm thankful nothing bad happened to President Obama or anyone else at the memorial service, this is certainly not great for the South African government.