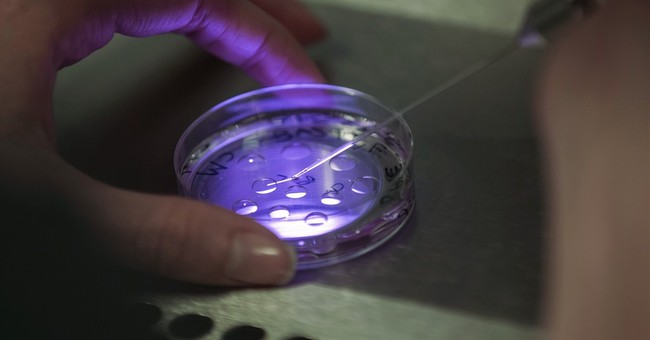 I'm currently in the United Kingdom attending a conservative conference, and I heard a particularly horrifying story that I thought merited retelling here on Townhall: in 2009, 127 babies who were conceived through government-funded fertility treatments were aborted by a government-funded abortion.

The United Kingdom has a single-payer health care system called the National Health Service. The benefits covered by NHS are quite extensive, and include such things as breast implants, caretakers for the morbidly obese, and in vitro fertilization (IVF) not included on American insurance plans, as it is a very costly procedure and is not necessary to sustain life. British women between the ages of 23 and 39 are eligible for up to three cycles of IVF in an attempt to have a child if they have experienced difficulty conceiving.

The Daily Mail reported last year that over 100 of children conceived through IVF were then subsequently aborted following a change of heart by the parents. Some children had prenatal diagnoses of genetic abnormalities like Down syndrome.

This is sickening and proof that entitlements simply breed other entitlements. The UK's health system has created a culture of ungratefulness and a selfish, "me-first" mentality. A baby isn't something that's to be tossed away when something goes wrong- especially when someone else footed the bill for the creation of the child.

While the Daily Mail piece placed most of the blame on parental selfishness, I see it a different cause. In the United States, a cycle of IVF costs thousands of dollars. In the UK, it can be free. A person is much less likely to care about wasting money if they do not see the actual cost of what they are paying. It's much easier to just decide to "give it another go" when someone else is paying for a very expensive treatment. For comparison's sake, observe the struggle and heartbreak experienced by the couples profiled on this television show. They've both invested thousands of dollars into having a child--do you think they'd throw it away and have an abortion based off of a change of heart?

The United Kingdom is a sad story of entitlements run out of control. This must be addressed before similar tragedies can take place in the United States.