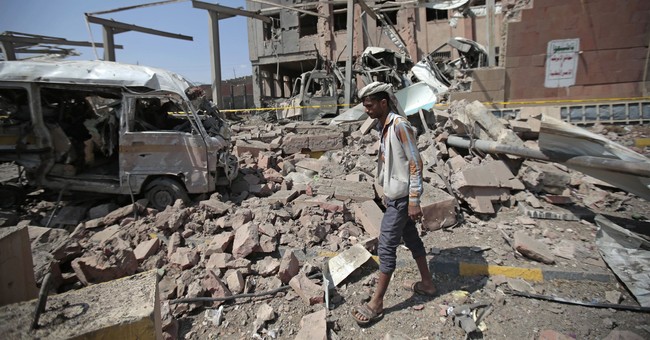 The Washington Post recently published an opinion piece in which Mohammed Ali al-Houthi, the head of the Supreme Revolutionary Committee of the Houthis, argued that his group is seeking an “honorable peace” in Yemen’s civil war and simply wants Saudi Arabia to stop airstrikes in the country.

However, far from being a normal political, military, or state organization, the Houthis are actually an Iranian and Hezbollah-backed Shiite Islamist terrorist group that has been fighting to take over Yemen for more than a decade. The Houthis’ slogan —“God is great! Death to America! Death to Israel! Curse upon the Jews! Victory to Islam!” — is indicative of the group’s larger ambitions, but the Houthis’ main targets so far have largely consisted of their immediate Sunni opponents on the Arabian peninsula.

According to the Counter Extremism Project, the Houthis’ campaign of deadly violence, mostly directed at the Yemeni central government and its military forces, extends back to 2004 and has been responsible for the deaths of thousands of people. In addition to killing more than 3,000 Yemeni soldiers from 2004-2010, the Houthis engaged in border skirmishes with Saudi troops in late 2009 and early 2010 that resulted in more than a hundred additional Saudi deaths.

During the same period of insurgency (in 2007 specifically), supporters of Houthi cleric Hussein Badr Eddin al Houthi threatened to harm Yemeni Jews living in the northern Saada region unless they vacated their homes in ten days. Many of those Jews subsequently fled to Yemen’s capital in Sanaa, but neither they nor any of the other Yemenis living there would see relative peace for long. As the result of a yearlong insurgency coordinated with forces loyal to then-former Yemeni President Ali Abdullah Saleh, the Houthis captured Sanaa in 2014 and forced the resignation of President Abdrabbuh Mansur Hadi in 2015, which began the still ongoing civil war between the Houthis and Hadi’s forces. Saleh himself was later assassinated by the Houthis in 2017 after offering to turn on the group in favor of negotiating to end the Saudi blockade of Yemen. (It is worth noting here that after securing control of Sanaa in 2014, the Houthis formed a new interim government that ultimately included the Post’s new opinion writer Mohammed Ali al-Houthi.)

According to CNN, in October 2016, Houthi rebels tried to blow up the American destroyer USS Mason with missiles on two separate occasions while the ship was in international waters. Although Houthi representatives denied carrying out the attacks, Houthi forces had allegedly conducted similar acts by firing missiles at civilian and military targets in Saudi Arabia in retaliation for Saudi-led airstrikes on Houthi targets in Yemen. By this point in the conflict, Houthi forces had also already kidnapped several American citizens, including an English teacher and a humanitarian aid-worker.

Given the Houthis’ history of mass murder, terrorism, kidnapping, and their attempted murder of our U.S. Navy personnel, why would The Washington Post be so willing to give one of the primary leaders of such a group unfiltered space to spread propaganda in its paper? The answer to this question might lie in the fact that al-Houthi’s piece criticized Trump and blamed the president and his administration for the continuing violence in Yemen [Note: In his Post piece, al-Houthi substitutes phrases like “Yemeni people” for the Houthis and refers to the Houthi government as “Yemen”]:

The continued escalation of attacks against the port city of Hodeida in Yemen by the U.S.-Saudi-Emirati coalition confirms that the American calls for a cease-fire are nothing but empty talk.The recent statements are trying to mislead the world. Saudi leaders are reckless and have no interest in diplomacy. The United States has the clout to bring an end to the conflict — but it has decided to protect a corrupt ally.

The blockade of the port city is meant to bring the Yemeni people to their knees.The coalition is using famine and cholera as weapons of war. It is also extorting the United Nations by threatening to cut their funds, as if it were a charity and not a responsibility required under international law and Security Council resolutions.

The United States wants to be viewed as an honest mediator — but it is in fact participating and sometimes leading the aggression on Yemen.

We are defending ourselves— but we don’t have warplanes like the ones that bomb Yemenis with banned ammunition. We can’t lift the blockade imposed on Yemeni imports and exports. We cannot cancel the air embargo and allow daily flights, or end the ban of importing basic commodities, medicines and medical equipment from any place other than the United Arab Emirates, as it is imposing on Yemeni business executives.

Trump and his administration clearly prefer to continue this devastating war because of the economic returns it produces — they drool over those arms sales profits.

We love peace — the kind of honorable peace defended by our revolution’s leader, Abdulmalik al-Houthi. We are ready for peace, the peace of the brave. God willing, Yemenis will remain the callers of peace and lovers of peace.

It’s not clear if we’ve reached peak Trump Derangement Syndrome at this point, but liberal journalists giving rhetorical aid and comfort to mass-murdering Islamist terrorists because they too don’t like Trump might be the most egregious example of such behavior yet.