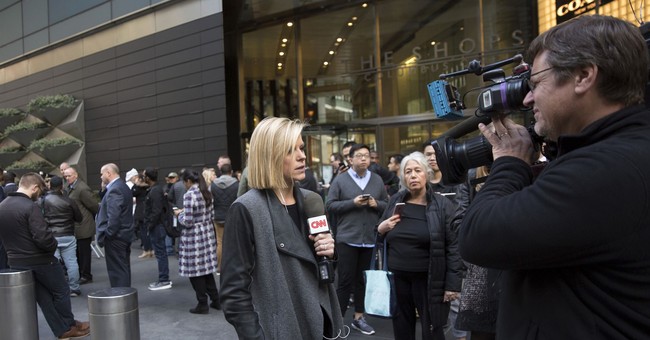 Little over an hour after a bomb was found at CNN’s New York City offices on Wednesday, the network’s journalists had already found the probable culprit in the bomb scare —President Donald Trump.

In view of multiple other bombs reportedly discovered either at or en route to other Democratic political figures and organizations over the past two days, including George Soros, Rep. Debbie Wasserman Schultz, Rep. Maxine Waters, former Attorney General Eric Holder, and former presidents Barack Obama and Bill Clinton, CNN viewed the attempted attack on its headquarters as part of larger plot inspired by Trump’s harsh criticism of his Democratic opponents.

In fact, as CNN anchors Jim Sciutto and Poppy Harlow reported from NYC’s streets about the bomb that had forced them to leave the set of their show just an hour before, CNN veteran anchor Wolf Blitzer jumped in from CNN’s Washington studios to inform viewers that there was a clear “pattern” to the bomb scares —all those targeted have “been very critical of the president” [emphasis mine]:

BLIZTER: It’s important to note that, Jim and Poppy, and I just want you guys to elaborate on this.

If we take a look at these suspicious devices, clearly where you are in New York City at Columbus Circle, the Time Warner Center, a suspicious package that was sent to the CNN New York Offices. It was addressed to the former CIA director John Brennan, who has been a very sharp critic of President Trump’s.

So it looks like there’s a pattern, Jim Sciutto and Poppy, that’s unfolding right now.

Sciutto immediately picked up on and amplified Blitzer’s point, agreeing there was “no question” that “they’re all, on that list -- you’ve just listed a number of folks who the president has accused of being unfair to him, that the president has publicly attacked at times.” Harlow then waded in to add that, while “you never want to jump to any conclusions,” she saw “a fact pattern that is indisputable that shows you that all of these targets are indeed targets where -- the president has been critical of.”

According to Mediaite, which has the video of the above exchange, Sciutto followed up by doubling down on his speculation that the attempted bombings of CNN and Democratic political figures were connected to President Trump:

Sciutto says that as police look into the events, they look for commonalities and an “MO.”

“Then you begin to look at motive,” he continued. “It’s very early in this, but when you look at that list it certainly has one thing in common, Wolf. And that something… folks that have been on the list, folks and organizations that the President attacks.”

Thus, even while admitting that law enforcement had not established a motive for the attempted bombings, CNN was already reporting that there was an “indisputable” “fact pattern” suggestive of just such a motive.

After Blitzer, Sciutto, and Harlow placed the blame on Trump for possibly inspiring the series of attempted bomb attacks, CNN anchors, reporters, and commentators repeatedly latched onto this point throughout their non-stop coverage of the story, according to Grabien News:

“Certainly a question for the president and the White House, is his rhetoric and his supporters that have been giving out, in these several weeks leading up to the elections, is that connected to any of this?” he asked. Zeleny also said those receiving bombs were criticized by Trump.

“The president is being briefed on this,” Zeleny reported. “So far they’re not saying we’re asking if he has a comment to the sense that all these packages are being sent to all these places he has criticized. As we’ve covered the rallies across the country, the rhetoric is extraordinarily intense. 13 days before the midterm elections. Indeed, it has been for a long time. We do not know if there is a correlation or not, but we are asking the White House for the president’s view on the rhetoric specifically. If he has an answer, we’ll let you know.”

On CNN, Wolf Blitzer reported that Rep. Debbie Wasserman Schultz’s Florida office was being evacuated. As of this report, it’s unclear why, but Blitzer nonetheless drew a link to Trump. In reporting the breaking news, Blitzer mentioned that she was “another sharp critic of the president.”

CNN’s Jake Tapper likewise connected the attacks to Trump, saying of the intended targets: “These are people and organizations that president Trump continually attacks, demonizes.”

Later in the afternoon (around 3:45 PM to be exact), while speaking with CNN “Prime Time” host Chris Cuomo on the streets of NYC, “Reliable Sources” host Brian Stelter also put the blame for the bomb attacks on “right wing outlets” that have harshly criticized CNN and other mainstream outlets for pushing fake news.

Also Wednesday afternoon, CNN put out an official statement from network president Jeff Zucker that appeared to place blame on Trump’s rhetoric for the attempted bombings: