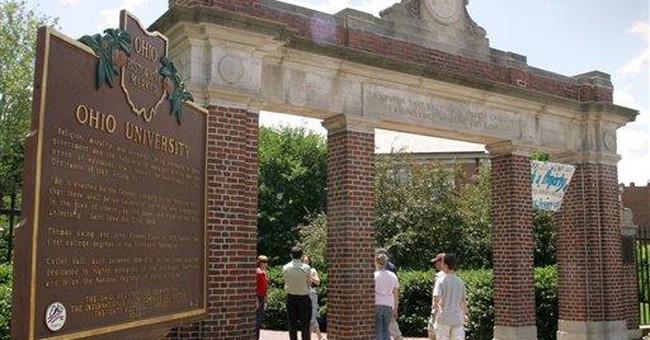 On Monday, one of the managers of an Ohio University student newspaper was arrested after campus police discovered that she had fabricated three separate threatening messages against herself, at least one of which was a death threat.

Anna Ayers, a journalism student who is also a member of OU’s student senate and was formerly a columnist for The Post, has been charged by university police with three misdemeanor counts of “making false alarms” in relation to the hoax threats. If convicted on the charges, Ayers faces up to six months in jail and a $1,000 fine for each of the three counts. She is first set to appear in court on Thursday morning to answer the charges.

According to The Post, which had reported on the fake threats last week, Ayers claimed that she had found two notes in her senate desk —one that directly attacked her for her “LGBTQ identity” and called her “a derogatory term,” and another threatening to kill her. Tellingly, The Post reported at the time that people at the school had already figured out that those notes probably came from someone involved with the student senate because although “[a]nyone [could] enter the senate office…whoever left the note had to know which desk belonged to Ayers” in order to deliver the threat.

After making her manufactured threats public, OU’s student senate postponed all of its events in favor of holding a special hearing on the “threats” against Ayers. At the hearing, Ayers reportedly spoke at length about the trials and tribulations caused by reading her own notes [emphasis mine]:

Ayers said she spent the weekend “angry, frustrated and disappointed”after finding the first note. She had to call her parents to explain the incident to them. After finding the death threat Monday, she spent hours with the threat “ringing over and over again in (her) head.”

As much as she struggled to deal with the content of the notes, she said it was harder to comprehend that they may have come from someone within Student Senate.

“Senate will never be the same for me,”Ayers said. “The friendships will continue to grow, and our successes will always evoke pride, but the memory of my time in senate and at OU will be marred by this experience. We will all have a memory of a time when this body failed one of its own.”

Ayers also directly called out the writer of the notes (herself, as we now know):

“You may find me revolting and worthy of a threat on my life, but in reality, it is your beliefs that are repulsive,” Ayers said. “You need to get this through your head, you f---ing a--hole: I am proud to be who I am, and nothing you could say or do will ever change that.”

At some unspecified point, Ayers concocted a third threatening note that she claimed to have found at her residence.

Apart from university police, no one else appears to have shown much skepticism about Ayers’s initial allegations. The prestigious E.W. Scripps School of Journalism, which Ayers is studying at, openly tweeted: “We stand with you, Anna.” Along with other student senate members, OU’s Senate President Maddie Sloat proclaimed that students needed to step up their fight in the future against the injustice and bias revealed at the school by Ayers’s claims. Even OU President Duane Nellis publicly condemned the threats against her. This situation of unquestioning belief only changed this week after OU police arrested Ayers and unequivocally asserted that she had “placed the messages herself, prior to reporting them.”