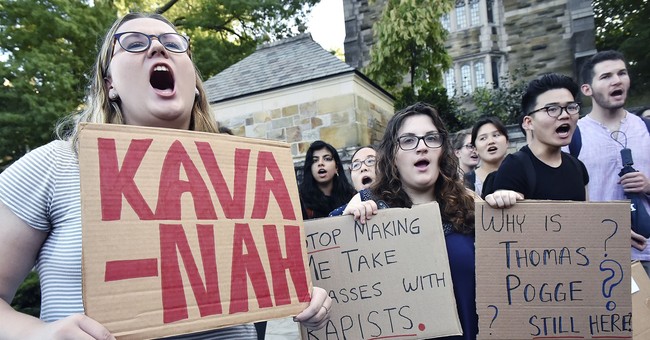 Ever since the initial accusation of attempted rape came out less than two weeks ago against Brett Kavanaugh, The New York Times’s opinion section has become increasingly saturated with articles designed to heap scorn on the judge.

In some instances, the Times’s writers have taken a relatively simple tack —Kavanaugh is guilty and deserves no presumption of innocence because he has been “credibly” accused by a woman. In other cases, Kavanaugh has been called a “pig” for knowing men who have been accused of sexual misconduct or being part of college fraternities that (forgive the redundancy) promoted drinking and promiscuity. Other pieces in the paper of record have promoted women’s personal stories about being raped, sexually assaulted, and harassed by people who are in no way related to Kavanaugh to argue that he is probably not a “decent man.” Predictably, this bias has even seeped into the Times’s hard news coverage, such as this story purporting to find out “What Teenagers Think About the Allegations Against Brett Kavanaugh” that couldn’t find a single non-rabid feminist or someone who supported the judge to interview.

And yet, few of these recent examples have come close to guest writer Lara Bazelon’s Monday contribution to The New York Times’s editorial crusade against Kavanaugh. Appropriately entitled “Man Up, Grassley. Question Blasey Ford Yourself,” Bazelon’s piece mostly consists of unrelenting personal attacks against Senate Judiciary Chairman Chuck Grassley and his Republican compatriots for their stated desire to have an experienced female attorney handle questioning for both Christine Ford and Judge Kavanaugh at Thursday’s expected hearing. More than twenty-four hours before even knowing who that lawyer would be (we now know that the questioning will be handled by experienced sex crimes prosecutor Rachel Mitchell), Bazelon was convinced that Grassley and his GOP colleagues were engaged in a “cynical, sexist and cowardly” plot to “outsource the questioning of Dr. Blasey” and thus commit the grievous sin of trying to avoid bad political optics from the spectacle of eleven “white men” going after Ford during the hearing [emphasis mine throughout]:

“Who will question Christine Blasey Ford on Thursday when she sits across from the Senate Judiciary Committee to testify about an alleged assault by Brett Kavanaugh during the summer of 1982?

“Senator Charles Grassley of Iowa, the committee’s chairman, and his Republican colleagues have proposed ceding that important responsibility to an outside female lawyer or female aides.

“Dr. Blasey and her lawyers have pushed back, demanding that Mr. Grassley and his colleagues question her themselves. They are right to do so. The Republicans’ attempt to outsource the questioning of Dr. Blasey is cynical, sexist and cowardly.

“Mr. Grassley said, ‘We reserve the option to have female staff attorneys, who are sensitive to the particulars of Dr. Blasey’s allegations and are experienced investigators, question both witnesses.’ The chairman knows the optics are bad for him. Mr. Grassley and his 10 Republican colleagues on the judiciary committee are all white men.”

Despite recognizing that Grassley’s concerns about optics are well-founded, Bazelon attacked Grassley and his colleagues on the Senate Judiciary Committee anyway, insisting that there was one correct way for them to question Ford:

“[T]he solution isn’t to remove men from the script. It’s to ask that they embody different characters: people who can pose respectful, probing questions, rather than bullies intent on shaming and demeaning the witness.

How much would you be willing to bet that —for Bazelon and Democratic lawmakers alike —the only acceptably “respectful,” non-bullying, and non-demeaning questions would be those that assume Ford’s near-absolute trustworthiness and honesty? And if that was indeed the case, how exactly could Bazelon expect Senate Republicans to dispute possibly false accusations without having the leeway to consider the possibility that Ford might not be telling the truth?

Unsurprisingly, instead of addressing such necessary and basic questions about the Senate’s fact-finding process, Bazelon immediately lambasted Grassley and Senate Republicans as sexists for wanting to give important governmental responsibility to a woman because that would (at least in this case) put the female lawyer into the “Vagina Ghetto”:

“Many people think that’s impossible, which leads to the second point: The Republicans’ plan is sexist. Handing off the questioning of Dr. Blasey to female staff members would be a gross departure from Senate practice and based on the risible idea that the questioning of sexual assault survivors is ‘women’s work.’

“I have written about the entrenched gender bias against female litigators. After a year of reporting, what stood out was a phenomenon of women being steered, often explicitly, into specialties where the cases turned on proving or disproving injuries to women’s genitals and reproductive organs.

“Whether it was female prosecutors clustered in rape and child-abuse units or suddenly becoming very in demand when it came to time to cross-examine plaintiffs injured from allegedly defective ‘female’ products, the consensus was that ‘it takes a woman to know a woman.’Again and again, women are told that these are their only real opportunities in courtrooms— and now, apparently, Senate hearings. What looks like an invitation for advancement may actually be enclosure in what I call the Vagina Ghetto, a restricted space outside of which women are not welcome. We need to stop reinforcing this tired trope.”

Within the confines of her piece, Bazelon did not provide evidence for the blanket assertion that women are being forced to work in the above-described “Vagina Ghetto,” but she did have time to conclude the article with some more juvenile invective challenging Sen. Grassley and his fellow majority members’ manhood:

“[Republican senators] are apparently too afraid to speak to [Ford] face to face…But that’s no excuse for Republicans to shirk their responsibilities and turn tail.

Come on, gentlemen. Man up.”

In this case, “man up” presumably comes somewhere between “shut up” and “step up!”