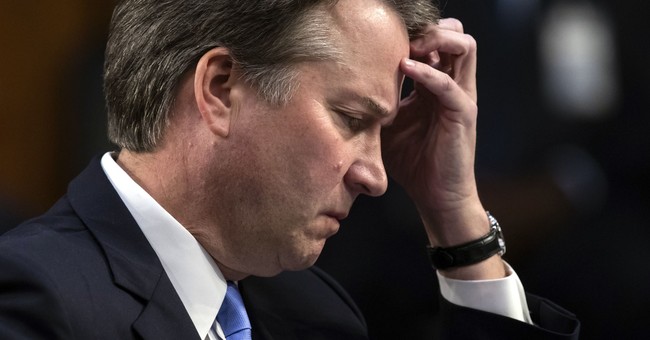 On Tuesday’s “The Situation Room,” CNN senior legal analyst Jeffrey Toobin argued that a joke Brett Kavanaugh told in 2015 was one of multiple pieces of “circumstantial evidence” pointing to Kavanaugh’s guilt in the case of sexual assault allegations recently levied against the Supreme Court nominee by California professor Christine Blasey Ford.

The show’s guest host and CNN chief White House correspondent Jim Acosta prompted Toobin’s claim by showing a video of Kavanaugh telling the joke and suggesting that it had something to do with Ford’s accusations of sexual assault and attempted rape [emphasis mine throughout]:

ACOSTA: And guys, I want to play this piece of video that came in this afternoon. It shows Brett Kavanaugh back in 2015 talking about what happens at Georgetown Prep staying at Georgetown prep. Not a very helpful soundbite for him, but let’s play it.

KAVANAUGH: [on tape] Fortunately, we had a good saying that we’ve held firm to this day —as the dean was reminding me before the talk —which is: What happens at Georgetown Prep, stays at Georgetown Prep. That’s been a good thing for all of us, I think.

Acosta then turned to CNN political reporter Rebecca Berg and asked: “What do you make of that?” Berg responded to Acosta in a somewhat confused manner, veering between admitting that Kavanaugh’s comments were clearly a joke not referring to the sexual assault allegations and arguing that the joke could be applied to Ford’s sexual assault claim and thusly “sounds much more nefarious” and “makes [Kavanaugh] sound flippant”:

“Well, obviously in that context, Jim, he was making a joke, and you could see where that would be funny in a normal context, but now of course we’re hearing that soundbite in a very different context. It makes him sound flippant. It, you know, you could apply it to the current allegations against him. It sounds much more nefarious, but of course he didn’t mean it like that at the time.”

Before Berg could wrap up her reaction to the tape and swerve back to the conclusion that Kavanaugh was not referencing the alleged sexual assault because “of course he didn’t mean it like that at the time,” Toobin interrupted with his take on Kavanaugh’s joke. Arguing that it was indeed nefarious and constituted one part of a set of “circumstantial evidence” of sexual assault, Toobin linked Kavanaugh’s joke to two books by Kavanaugh’s high school friend (and purported witness to the alleged sexual assault) Mark Judge about Judge’s struggles with alcoholism:

“Well, and how about -- and how about Mark Judge? I mean, Mark Judge has written not one, but two books about being a blackout alcoholic at Georgetown Prep at the time when, according to Ms. Blasey, the assault took place by two drunken students. I mean, it doesn’t prove anything in and of itself, but it is circumstantial evidence that if you were doing an actual serious investigation you would figure into the process.

While Acosta did not directly claim that the Kavanaugh joke was evidence of sexual assault, earlier in the same broadcast he played the joke tape for another group of panelists after darkly intoning that CNN had “unearthed” a new video showing “what happened at Georgetown Prep”:

After listening to the tape, Acosta suggested that Kavanaugh might have been joking about trying to rape Christine Ford:

“Obviously, Susan, not a conclusive, you know, piece of video that says, you know, that he did anything, but it is --it does speak to this notion that perhaps, you know,there are portions of his childhood that he would rather not come to light I suppose.”

You can watch the CNN segments in question at the following links via YouTube (here and here).