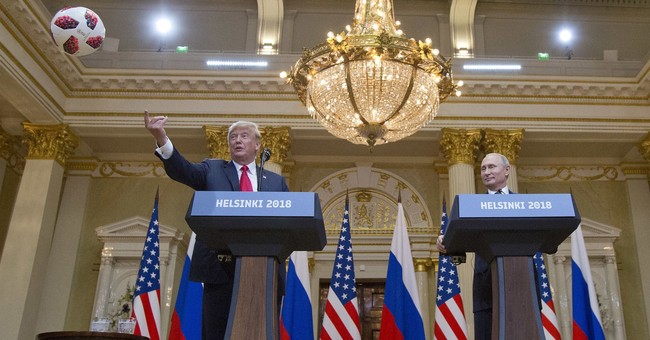 On Tuesday, Tucker Carlson brought Stephen F. Cohen onto his evening show to evaluate the mainstream media’s coverage of the Trump-Putin Helsinki summit and discuss the significance of the presidential meeting in the context of the history of U.S.-Russian relations. Cohen, who is a professor emeritus of Russian studies at both NYU and Princeton University, did not hold back in lambasting news outlets for their over-the-top coverage portraying Trump as a traitor.

Carlson began the segment with Cohen by asking the professor to “assess…the reaction” to the summit and the press conference afterward, including former CIA Chief John Brennan’s accusation that Trump had committed an impeachable act of treason. Cohen replied that “the reaction by most of the media, by the Democrats, by the anti-Trump people is like mob violence. I've never seen anything like it in my life.”

Cohen continued by laying out the historical context for meetings between Soviet and American leaders during the height of the Cold War:

“This is the president of the United States, doing what every president, Tucker, since Franklin Delano Roosevelt did in 1943 with Stalin, meeting with the head of the Kremlin. And every president since Eisenhower, a Republican by the way, has met with the leader of the Kremlin for one existential purpose: To avoid war between the two nuclear superpowers.

“Today, in my considered, scholarly, longtime judgment, relations between the United States and Russia are more dangerous than they have ever ?let me repeat ?ever been, including the Cuban missile crisis.”

Cohen expressed his hope, despite not having voted for Trump, that “I want my president to do what every other president has done ?sit with the head of the other nuclear superpower and walk back the conflicts that could lead to war, whether they be in Syria, Ukraine, in the Baltic nations, in these accusations of cyber-attacks.”

Cohen then cut to the heart of the issue, charging that critics of Trump’s comments at the Helsinki summit were being hypocritical by calling the president a traitor for engaging in normal diplomatic talks. The professor pointed out that “every president has been encouraged to do that and applauded by both parties. Not Trump. Look what they did to him today. They held a kangaroo court. They found him guilty.”

Cohen also directly attacked John Brennan and called for him to be put under oath to testify about his role in “inventing Russiagate”:

“And then you had the former head of the United States’ CIA, who himself ought to be put under oath and asked about his role in inventing Russiagate, calling the President of the United States treasonous. What have we come to in this country? And what’s going to happen in the future?”

At this point in the segment, Carlson jumped back in to ask Cohen whether it would be correct to say that there is a group of bipartisan leaders in America who want to escalate conflict with Russia, seemingly at any cost. Cohen agreed with Tucker’s basic assessment and attributed Trump critics’ obsession with impeaching Trump for their hysterical comments about the president and Russia:

CARLSON: Well, those are questions that adults ought to be discussing, I think. But tell me if my assessment is wrong. It seems almost as if some in our leadership class on both sides, Republicans and Democrats, seek increased conflict with Russia. Do you think that’s right, and if it is, why?

COHEN: Alright, you've asked a fundamental question. Do they know what they're doing? I don't know.

They seem to hate or resent the idea of Trump as president, that they've lost all sense of American national security. I would ask them a question -- if you ever get these people on, ask them this question, for yourself, for me, for the nation: Do you ?these people who are hunting Trump ?do you prefer trying to impeach Trump to trying to avert war with nuclear Russia? That’s the bottom line, and that’s where we're at today, because when I look into why they’ve denounced this summit, that’s what they’re doing.

The entire video of this segment can be found at Real Clear Politics at this link in addition to a full transcript of Cohen’s comments.