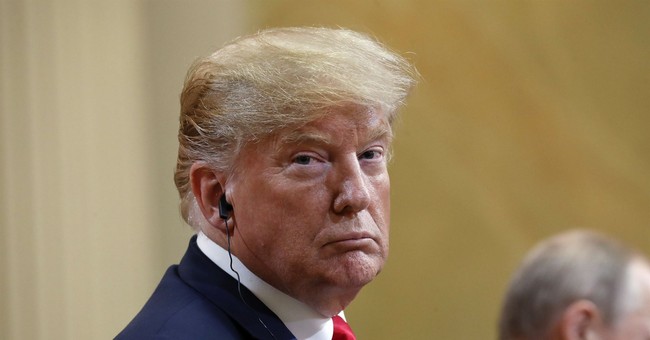 Mudd, who was appointed to his position at the FBI by the bureau’s then-Director Robert Mueller, made these comments in response to a question from CNN anchor Anderson Cooper about whether Mudd agreed with Senator McCain’s assessment that Trump’s performance in Helsinki was the “most disgraceful display…by an American president on the world stage.” Mudd replied at length [transcript from NewsBusters; emphasis mine]:

“I do [agree with McCain]. But I think you have to step back even just a short time after this and say: What next? You have seen senators come out. In the past, we have seen a senator who is in the midst of a painful illness, Senator McCain. You’ve seen senators like Jeff Flake who are leaving the Senate. Now you see Marco Rubio still, obviously, in the fight, speaking out.

“My question would be: When do members of the President's inner circle start to say, ‘Look, we have an overseas dilemma where you are portraying us, in terms of the American government, as worse than a tyrant, that is, Vladimir Putin.’”

The Secretary of Homeland Security came out with statements this week about continued Russian interference. This was not on Obama's watch, that's this week. FBI Director continues the investigation. Department of Justice continues support for the investigation. Congress continues saying that this investigation is legitimate. Curious point in American government - when do we see almost a shadow government come out and say, ‘We cannot side with the government, whether it’s the cabinet or the Senate.’ I think that's the big question.”

Based on his above comments, Mudd appears to be suggesting that various elements of the U.S. government, including senators, representatives, members of Trump’s cabinet, and domestic law enforcement and intelligence agency functionaries from the highest levels should actively plot together to counter Trump and his policy decisions.

This kind of open musing on one of America’s most prestigious news networks about subverting a democratically elected leader (who was partially elected on his promises to establish better relations with Russia and scale back America’s aggressively interventionist foreign policy in general) is, unfortunately, nothing new in the current American political climate. The current round of condemnations and accusations that Trump has committed treason and is a puppet of the Putin regime who must be #Resisted! strongly resemble Democratic arguments from late 2016 claiming that Trump was a traitor who “colluded” with Russia to hack the DNC and its email infrastructure. Even though nearly two years later there is still no evidence that the Trump campaign knowingly worked with Russian operatives or did anything more nefarious than what we know the Clinton campaign did in trying to get dirt on Trump from Ukrainian and UK government officials and intelligence agents, the media’s narrative that Trump was a successful Manchurian candidate, possibly even a Kremlin asset since 1987, has not gone away.

Indeed, Trump’s remarks in Helsinki certainly served as easy fodder for the Russiagate-obsessed media and aided them in intensifying their anti-Trump rhetoric, but the president’s apparent skepticism of the American intelligence community’s assessment that Russia hacked the DNC is actually pretty easy to justify given that this assessment relies in large part on the work of a private cybersecurity firm that has, according to the Ukrainian military and a British think tank, falsely accused Russia of another major 2016 hacking attack based on the same logic. According to Voice of America [emphasis mine]:

An influential British think tank and Ukraine’s military are disputing a report that the U.S. cybersecurity firm CrowdStrike has used to buttress its claims of Russian hacking in the presidential election.

The CrowdStrike report, released in December, asserted that Russians hacked into a Ukrainian artillery app, resulting in heavy losses of howitzers in Ukraine’s war with Russian-backed separatists.

But the International Institute for Strategic Studies (IISS) told VOA that CrowdStrike erroneously used IISS data as proof of the intrusion. IISS disavowed any connection to the CrowdStrike report. Ukraine’s Ministry of Defense also has claimed combat losses and hacking never happened.

A CrowdStrike spokesperson told VOA that it stands by its findings, which, they say, "have been confirmed by others in the cybersecurity community.”

The challenges to CrowdStrike’s credibility are significant because the firm was the first to link last year’s hacks of Democratic Party computers to Russian actors, and because CrowdStrike co-founder Dimiti Alperovitch has trumpeted its Ukraine report as more evidence of Russian election tampering.

Alperovitch has said that variants of the same software were used in both hacks.

Trumpeting a hacking attack that never even happened as definitely having been perpetrated by Russia should have led to some consideration by now within our intelligence community that they need to see the DNC servers for themselves to determine what really happened to them. It’s possible that Trump is already aware of this problem with the intel community’s assessment given his and his advisors’ access to top secret materials.

So here’s just a thought, maybe Trump should at least be given the benefit of the doubt before CNN and our new “shadow government” overlords get to burn him at the stake - either figuratively or literally - on the White House lawn?