Back from the Dead: Murdered Russian Journalist Revealed to Be Alive After Staged Assassination 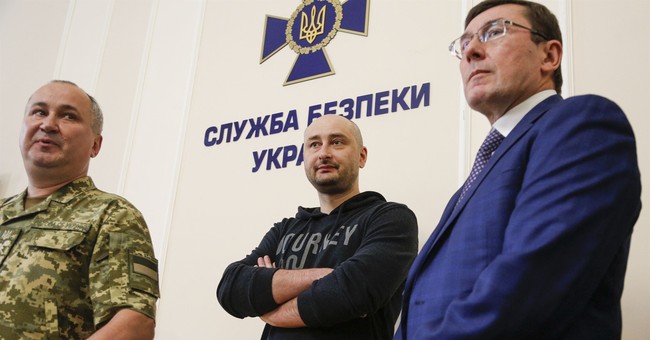 On Tuesday, Ukrainian authorities announced that Russian journalist and prominent Kremlin critic Arkady Babchenko had been shot and killed in his apartment building in the Ukrainian capital of Kiev. However, in a stunning spectacle less than 24 hours later, Babchenko appeared in person at a press conference about his murder at the headquarters of the Ukrainian Security Service (SBU) to prove that he was, in fact, alive and well.

At the televised conference, SBU head Vasyl Hrytsak told press that Ukrainian police and other government officials had staged Babchenko’s assassination and disseminated fabricated information about the fake event to journalists all over the world as part of an elaborate sting operation to stop a real plot to kill Babchenko. According to Hrytsak, Ukrainian intelligence launched the operation after learning that Russian security services had paid a former pro-Russian separatist fighter $40,000 to plan Babchenko’s killing. The former fighter, who is a Ukrainian citizen, has been arrested by Ukrainian police in connection with the assassination plot after reportedly offering to pay a counterterrorist specialist $30,000 to carry it out.

According to the Russian language outlet Meduza, Hrytsak also levied far more serious accusations against the Russian government at the press conference. Namely, Hrytsak told reporters that the Kremlin intended to use Babchenko’s assassination as a test run for a larger operation to murder an additional 30 targets in Ukraine and that the arrested murder conspirator was planning to purchase 300 Kalashnikov assault rifles and several hundred kilograms of explosives for that purpose.

After Hrytsak’s announcement about the SBU’s successful operation to save Babchenko, the journalist walked up to the podium to address a televised audience. In addition to apologizing to his family and friends for helping to fake his own death, Babchenko expressed gratitude to Ukrainian authorities for saving his life [transcript from Radio Free Europe]:

"First, I’d like to apologize for everything you’ve had to go through. I’ve been at the funeral of many friends and colleagues, and I know this nauseous feeling. Sorry for imposing this upon you, but there was no other way.

"Special apologies to my wife for the hell she’s been through these two days. Olya, excuse me, please, but there was no other option.

"I’d also like to thank the Ukrainian Security Service for saving my life. […]

"Over this month, I’ve seen the guys work hard like bulls. We’ve been in constant contact and planned our actions. The result was this special operation that ended up in arresting the guy. He is in custody. Or has been detained. I don’t know the details.

"The crime is a proven fact. All the evidence is there and, most importantly, apart from saving my life, for which I’m very thankful, bigger and more serious terrorist attacks have been prevented. These terrorist attacks were prepared thoroughly.

"A week or two ago, Russia announced that [Islamic State] were preparing terrorist attacks before the Champions League [final in Kyiv]. I think it was going to be my [assassination].

The Ukrainian government’s campaign to fake Babchenko’s death was quite extensive and dominated media coverage in Europe yesterday after the announcement of the journalist’s murder. Ukrainian police in Kiev even fabricated a police sketch of Babchenko’s assassin and distributed it to the press to bolster their story. Consequently, the journalist’s reported murder drew swift condemnation from across the world, including important political bodies like the Organization for Security and Cooperation in Europe and journalist advocacy groups such as the Committee to Protect Journalists (CPJ) and Reporters without Borders (RSF).

However, in the wake of the revelation that Babchenko’s death was staged, RSF Secretary General Christophe Deloire took to Twitter to express outrage at Ukraine’s use of deception to manipulate the media into spreading fake news:

RSF expresses its deepest indignation after discovering the manipulation of the Ukrainian secret services, this new step of a war of information. It is always very dangerous for a government to play with the facts, especially using journalists for their fake stories. https://t.co/XwwbepYsjc

For their part, CPJ released a more tempered statement demanding an in-depth explanation for why the Ukrainian government lied to the press:

"We are relieved that Arkady Babchenko is alive," said Nina Ognianova, CPJ's Europe and Central Asia program coordinator. "Ukrainian authorities must now disclose what necessitated the extreme measure of staging news of the Russian journalist's murder. CPJ is investigating this unprecedented situation and will have further comment once we have more details."