Mexico Claims It Will Disband Illegal Alien Caravan, But May Be Helping Them to the Border Instead 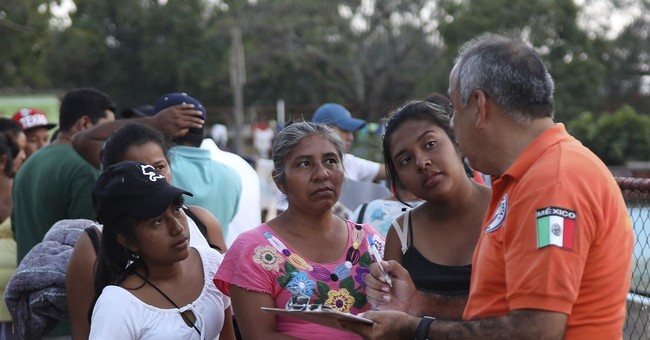 On Monday night, the Mexican government’s National Institute of Immigration (INM), which regulates Mexico’s internal migration, announced that it plans to disband the Central American illegal alien caravan by Wednesday.

The caravan has been marching through southern Mexico towards the U.S. border since March 25th, but has only made it to a small town in the state of Oaxaca, not that far from its starting point near the Mexico-Guatemala border.

President Trump drew attention to the caravan in a string of tweets on Easter Sunday and Monday, but a federal delegate from INM told BuzzFeed News that the Mexican government was not folding to pressure from the Americans or any other government.

JO Rodríguez, a federal delegate with INM, told me this was not in response to Trump speaking out against the caravan. “Mexico is acting without pressure to find a solution to this problem.”

The delegate further clarified that, in fact, Mexico is planning on giving “humanitarian visas” to “vulnerable groups” within the caravan, including “pregnant women, people with disabilities, or people with chronic illnesses like HIV.” Members of the caravan who receive such visas will be able to travel unhindered by Mexico’s police and other immigration enforcement agents. Furthermore, even those who do not receive visas can apply to remain in Mexico for 30 days, during which time they can also travel throughout the country without government restrictions.

Ultimately, this means that some significant number of the thousand or more illegal aliens currently in the caravan will be able to either stay in Mexico or pursue their prior goal of travelling to the U.S. border.

This may partially explain why, even after INM’s announcement, caravan organizers from the pro-illegal immigration activist group Pueblo Sin Fronteras (PSF, “People Without Borders) have declared that the agency’s decision is a victory for their group. On Twitter, one of PSF’s organizers claimed that his organization had negotiated a deal with the Mexican government for the above-mentioned concessions on visas that would permit travel through Mexico:

The Caravan bent the Mexican government into providing permission to travel to seek refuge. Don’t be fooled, the government isn’t “disbanding,” it, it’s conceding its participants’ right to apply for asylum without traveling in the shadows.@pjpodesta @PuebloSF @AlOtroLado_Org https://t.co/JpK6ZHuWzk

There is another reason to be skeptical of the idea that Mexican authorities genuinely intend to disband and deport the illegal alien caravan, and that is the presence of Grupos Beta among them, as shown by a photo from BuzzFeed News that shows one of Grupos Beta’s agents conversing with members of the caravan. (Another photo of the same Grupos Beta agent with the caravan headlines this article.)

But what is Grupos Beta, and why would its presence with the caravan be significant? Well, according to past reports from the Los Angeles Times and the University of Arizona’s Arizona Sonora News Service, Grupos Beta is not an immigration law enforcement group per se. Instead, although they are part of INM, Grupos Beta’s primary tasks are to conduct search and rescue operations for internal migrants and to protect and help Mexican citizens who are still in country as they make their way to the United States. From the Times’s report [emphasis mine]:

When he finds them, he doesn't arrest them. Rather, he makes sure that they know what dangers they face and lets them go their way. If they're in trouble, he helps.

Maldonado is one of the veteran agents from Grupo Beta, the decade-old border unit established by the Mexican government to protect migrants as they make their way north to the U.S.

In Mexican eyes, these are not illegal migrants. Rather, they are citizens who might face grave risks while still traveling freely within their own country. Beta officers have the delicate task of protecting migrants without encouraging them.

In addition to the 125 warning signs put up around Mexicali, Beta agents have installed several 55-gallon drums of water at strategic border points [near the U.S.] to help keep migrants alive.

Desperate migrants come seeking help at the modest Beta office a block from the border fence. Hundreds have been given free meals, and dozens have slept in the office, usually after a failed crossing attempt.

A significant number of migrants heading for the United States come from Central America, and Grupo Beta has deployed about one-third of its agents on Mexico's southern border. While other police units arrest foreign migrants who are illegally in Mexico, Beta agents help them if they are in trouble, just as they do Mexicans.

So, in other words, the caravan is now being aided by an arm of the Mexican government whose express purpose is to help and “protect” migrants within Mexico, including illegal aliens from Central America just like those in the current caravan. If Mexico really intended on sending the caravan’s migrants back home, then they could have deployed real police units to do so.

According to BuzzFeed News, the Mexican government’s Secretariat of the Interior claims to have already deported about 400 people from the caravan back home, but for the thousand plus remaining illegal aliens, it appears that Mexico is actually preparing to help them reach the United States.