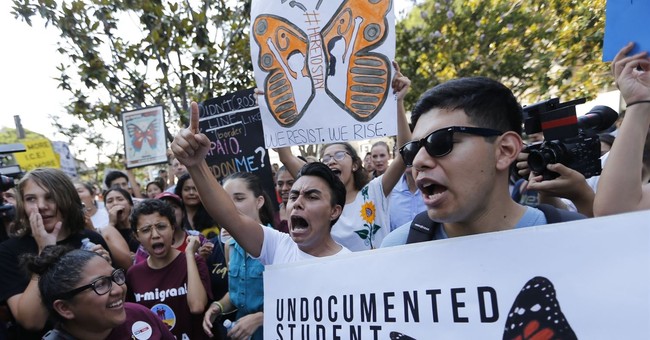 On Tuesday, pro-illegal alien activists who want to “liberate” the Southwestern United States from the “North American Empire” are working with left-wing unions like the L.A. County Federation of Labor to protest President Trump’s visit to California and “drive him out of Los Angeles.”

According to the Facebook page for the protest, the Los Angeles chapter of Unión del Barrio is the primary organizer for the event. Protestors plan to assemble in a park in Beverly Hills at 5 PM local time:

Donald Trump will be visiting Beverly Hills on Tuesday, March 13th. We are planning a massive protest to drive him out of Los Angeles!

We call on ALL organizations who stand against fascism, imperialism, capitalism, racism and all forms of hatred to join this action!

On Monday night, the Los Angeles County Federation of Labor posted on its official Twitter account in support of the protest, which is called “Trump Out of LA”:

Let's show Trump we do not welcome hate in Los Angeles! #resist pic.twitter.com/ARiY4Q11fm

According to Unión del Barrio’s (UdB) official historical introduction page, the organization is a “revolutionary nationalist formation” with members placed all over the country, especially in Southwestern U.S. cities such as San Diego, Los Angeles, Phoenix, and El Paso. UdB sees its members as “Mexicana and Mexicano freedom fighters” whose “ultimate objective” is “the national liberation and revolutionary reunification of México and the unification of our peoples [sic] struggles across Nuestra América.”

In the UdB’s understanding, “Nuestra América” — frequently called Aztlán — includes the land that the United States annexed from Mexico after the Mexican-American War, including most of what now comprises the states of California, Texas, New Mexico, Utah, Nevada, Arizona, and Colorado. UdB openly seeks to reconquer these territories for “la Raza,” or the Race, which is how Latino separatists and nationalists in America typically collectively refer to themselves.

A working document from 1981 about the group’s ideological outlook sums up their worldview quite nicely [emphasis mine]:

“The political involvement and experiences of Unión del Barrio membership has led us to an essential conclusion: for our people to break the historical bonds of oppression and exploitation we must self-determine… our own destiny through Chicano Nationalism… The dominant Anglo society has structurally denied us our true political and cultural history. This denial [of our history] is consciously committed as an attempt to hide the vicious Yanqui [Yankee] take over and continuing subjugation of Aztlán, México, and Latin America…

“Unión del Barrio recognizes Chicano Nationalism as the only legitimate avenue for achieving Chicano Liberation… For the Chicano, nationalism means the survival and growth of culture; our right to social, political, and economic self-determination; and the right to control our land of Aztlán… Chicano Nationalism does not claim superiority over other nationalities, but it does demand equality. Chicano Nationalism must be used to direct our daily and future activities, both as individuals and as an organization…”

UbD’s writings are also filled with neo-Marxist and communist propaganda terms expressing just as much revulsion for capitalism as for “Yanqui” imperialism and “gringo controlled politics” [emphasis mine]:

"[B]y the end of 1983 Unión del Barrio had become the one of the most active movement organizations throughout Aztlán. Through practical barrio-based work, UdB was able to concretely show how our socio-economic condition was not based on some reluctance or inability of la raza to better our condition. The real problem was (and is) a system built upon racism and sexism, colonialism, imperialism and capitalism. More precisely, since its founding, Unión del Barrio has challenged the false front of “democracy” continuously fed to our communities within the United States, exposing this parasitic system as dependent on keeping our people and other oppressed peoples undereducated, unskilled, disorganized, and politically powerless."

Originally founded in 1885, the Los Angeles County Federation of Labor (LA Fed) is one of the largest unions in the Los Angeles area, representing more than 300 smaller affiliated unions and 800,000 workers. LA Fed is in turn affiliated with AFL-CIO, the largest federation of American labor unions in the country. In total, AFL-CIO represents roughly 12.5 million people nationwide.

According to its website, LA Fed has pursued more open “immigrants’ rights” activism in recent decades under the “visionary” leadership of several new faces, including Rusty Hicks, who assumed the federation’s presidency in 2014.

Given today’s planned protest, it now appears that a prominent AFL-CIO affiliate openly supporting a protest led by racial separatists who want to conquer large swaths of the United States is the new normal in California politics.