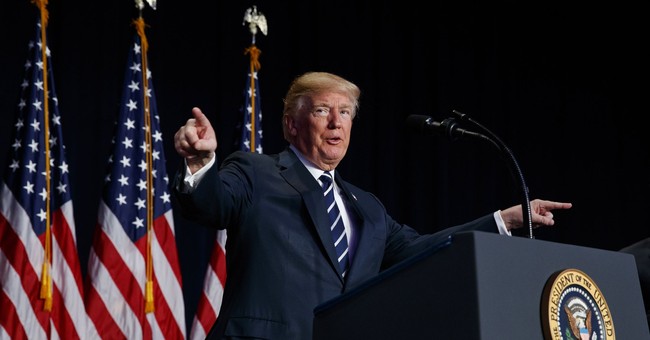 On Thursday morning, President Trump spoke at the annual National Prayer Breakfast, mainly using his address  there to promote America’s commitment to religious faith as a foundational pillar of its political life. Trump also spent a significant amount of time holding up individual Americans as national heroes for their personal struggles and sacrifices on behalf of others.

Trump pitched his main message about the importance of prayer and faith early on in his speech, placing strong emphasis on the idea that Americans’ rights do not emanate from the government, but are inherent to our humanity and must be protected:

“Each year, this event reminds us that faith is central to American life and to liberty.  Our founders invoked our Creator four times in the Declaration of Independence.  Our currency declares, “In God We Trust.” And we place our hands on our hearts as we recite the Pledge of Allegiance and proclaim we are “One Nation Under God.” Our rights are not given to us by man; our rights come from our Creator. No matter what, no Earthly force can take those rights away.”

Trump continued by praising normal Americans for their everyday “acts of kindness, courage, and generosity” that help contribute to America’s prosperity and freedom. The president singled out active members of the military, teachers, police, and parents working multiple jobs to provide for their families as noteworthy examples of such people. Trump also added that “their selfless deeds…reveal the beauty and goodness of the human soul.”

The president then alluded to some more specific events from the first year of his presidency, including the deadly mass shooting in Las Vegas and the slew of hurricanes that struck America’s southeastern states and territories, and lauded first responders and civilians alike for the way that they responded to these tragedies:

“When catastrophic hurricanes struck, first responders and everyday citizens dove into rushing waters to save stranded families from danger.  And they saved them by the thousands.  Neighbors opened their homes to those in need of food, clothes, shelter.  Firefighters braved blinding smoke and flames to rescue children from devastating wildfires.

“During the horrific shootings, strangers shielded strangers, and police officers ran into a hail of bullets to save the lives of their fellow Americans, right in Las Vegas.  A terrible day, a terrible night. But such bravery.

“All we have to do is open our eyes and look around us, and we can see God’s hand.  In the courage of our fellow citizens, we see the power of God’s love at work in our souls, and the power of God’s will to answer all of our prayers.

“When Americans are able to live by their convictions, to speak openly of their faith, and to teach their children what is right, our families thrive, our communities flourish, and our nation can achieve anything at all.”

Trump also made a connection between America’s faith and his administration’s successful role in leading a coalition that has almost entirely eliminated the Islamic State on the battlefields of Syria and Iraq:

“Together, as Americans, we are a tireless force for justice and for peace.  We have witnessed this truth over the past year.

“For years, ISIS had brutally tortured and murdered Christians, Jews, religious minorities, and countless Muslims. Today, the coalition to defeat ISIS has liberated almost 100 percent of the territory just recently held by these killers in Iraq and all throughout Syria.”

Trump went on to pledge America’s moral and political support for all people living under authoritarian regimes, especially those like Iran, Cuba, and North Korea, which suppress public religious expression. The president also noted that North Korean defector Ji Seong-ho, who was present at last week’s State of the Union, is a dedicated Christian who used his faith to help sustain him through brutal torture at the hands of North Korean government officials.

Trump concluded his speech by reiterating his opening thesis about religion being an essential part of making America a great nation:

“So today, inspired by our fellow citizens, let us resolve to find the best within ourselves.  Let us pray for that extra measure of strength and that extra measure of devotion.  And let us seek to build a more just and peaceful world, where every child can grow up without violence, worship without fear, and reach their God-given potential.

“As long as we are true to America’s founding and the example that all of these great founders have set, we can all be heroes to everybody, and they can be heroes to us. As long as we open our eyes to God’s grace and open our hearts to God’s love, then America will forever be the land of the free, the home of the brave, and a light unto all nations.

“Thank you for this incredible event and to our wonderful hosts.  And thank you to all of our heroes for serving, protecting, and inspiring America each and every day.

Some Democrats were not entirely happy with this message, however. In an apparent attempt to knock Trump for not supporting endless illegal mass immigration, Rep. Ted Lieu (CA) tweeted a famous passage from Matthew about welcoming strangers:

In light of the National Prayer Breakfast, I am sharing one of my favorite Bible passages: "For I was hungry and you gave me food, I was thirsty and you gave me drink, I was a stranger and you welcomed me." Matthew 25:35.