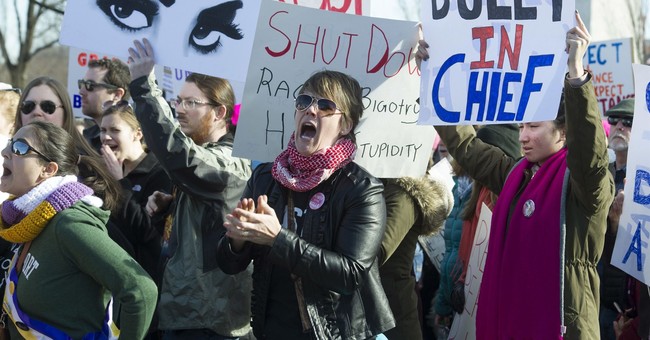 After last night’s State of the Union address, the American Civil Liberties Union was extremely upset at the fact that President Trump used the word “America” more than 80 times throughout the course of his speech.

“Tonight, President Trump said the word ‘America’ more than 80 times in his speech. Yet, after a divisive first year, we hear and feel how exclusionary that ‘America’ is, with policies that have harmed so many vulnerable American communities. The ACLU stands ready to protect these communities, both in the courts and at the polls.

“In particular, the immigration plan put forth by Trump would hold Dreamers hostage to his demands for a harmful border wall and an even larger mass deportation force. We are at this crossroads because of the president’s deeply destructive ideas fomented by his nativist allies and divisive rhetoric. We will continue to stand up for these young immigrants and ensure they continue to contribute to our country. We cannot let America’s Dreamers be deported.”

The ACLU has been at the forefront of efforts to support illegal immigrants and pro-illegal alien activists in their fight against law enforcement and the rule of law over the past several years. Thus, it’s no surprise that they would be so emotionally triggered by a president refusing to grant unconditional amnesty to Obama’s DACA recipients, whom the ACLU has strenuously campaigned for recently. Last August, the ACLU set the tone for demands for a “clean” DACA bill by issuing a statement decrying the Trump administration for considering an immigration reform bill that would ask for restrictions on legal immigration, more funds for border security, and an E-verify system in return for shielding DACA recipients from deportation:

It is abhorrent for the Trump administration to treat the lives and futures of Dreamers, including 800,000 Deferred Action for Childhood Arrivals recipients, as bargaining chips to further its racist agenda. For the past five years, Americans have benefited from the protections and opportunities, afforded by the DACA program, that make it possible for Dreamers to fully contribute to our communities. President Trump, who is currently considering ending DACA following an ultimatum issued by ten states, should commit to keeping the program on the books until Congress passes a clean legislative solution to address Dreamers’ status.

For example, ACLU Legislative Assistant Katie Egan wrote a blog post yesterday complaining about ICE agents arresting and deporting illegal aliens who openly engage in pro-amnesty protests while flouting their immigration status. Egan characterized these law enforcement actions as a dangerous attack on freedom of speech. She also labeled the arrests of violent anarcho-communist rioters at last year’s inauguration as another example of Trump’s supposed contempt for free speech and dissent, raising further questions about the ACLU’s respect for the actual civil rights of Americans not to have their cars set on fire, storefronts smashed, or heads bashed in with bricks and baseball bats.

Of course, as long as mainstream Democratic politicians continue to openly support undermining America’s sovereign right to borders and laud anarchist terrorism (which Rep. Keith Ellison did last year), groups like the ACLU will likely continue to flourish in the country whose name they cannot even stand to hear their own president say.