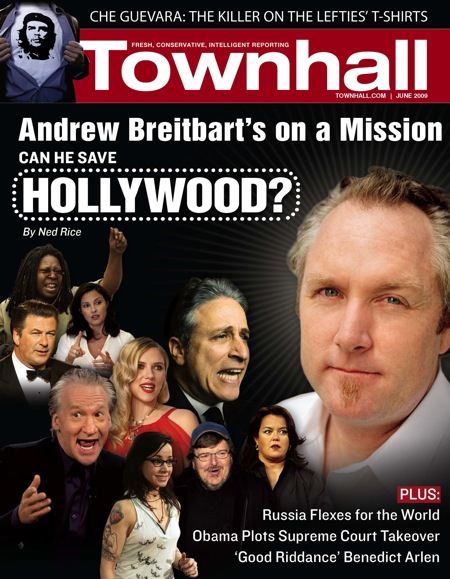 Townhall subscribers are already clamoring about the June issue of Townhall magazine and the exclusive profile of Andrew Brietbart, the Hollywood conservative whose courage has rallied many right-wingers to step out of the shadows. We call it the “Breitbart Effect.” Who is the man behind the conservative voice in Hollywood?Will he save Tinsel Town?Is he alone?Find out in the June issue of Townhall magazine.We also have a sobering report on the challenges the United States faces from a resurgent Russia that’s growing in strength and influence. And are you sick of the Che Guevara T-shirts that are popular among the lefties? Humberto Fontova reveals the bloody and horrible truth about the Left’s favorite “rebel.”Is Keynesian economics really what the U.S. needs now? President Obama thinks so, but economist J.D. Foster explains why it’s dangerous to repeat the failed policies of the past.Hundreds of thousands of Americans gathered at tea parties nationwide to protest big government and higher taxes. But what’s next? Our Jillian Bandes takes a look. If you’re a subscriber, you’re already reading about all of this. If you’re not, here’s a closer look at what we’re offering in the June issue—which you can order today and CHOOSE YOUR FREE BOOK with your order.
*** 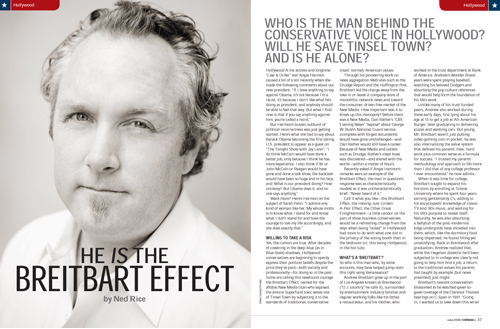 Our cover story, “He Is the Breitbart Effect,” tells the story of the man who is mobilizing Hollywood conservatives. Andrew Breitbart is giving a voice to many closeted right-wingers who have been afraid to speak up.Los Angeles television writer, Ned Rice (who has written for “The Tonight Show with Jay Leno,” “Real Time with Bill Maher,” “Jimmy Kimmel Live,” “The Late Late Show” and “The Half-Hour News Hour” and other shows) interviewed Breitbart about his life, goals and passions.

Yes, the rumors are true. After decades of cowering in the deep-blue (as in Blue State) shadows, Hollywood conservatives are beginning to openly express their political beliefs despite the price they’ve paid—both socially and professionally—for doing so in the past. Some are calling this newfound courage the Breitbart Effect, named for the affable New Media titan who exposed the amoral Superfund toxic waste site of Tinsel Town by subjecting it to the standards of traditional, conservative (read: normal) American values.Through his pioneering work on news aggregation Web sites such as the Drudge Report and the Huffington Post, Breitbart led the charge away from the take-it-or-leave-it company store of monolithic network news and toward the consumer-driven free market of the New Media. How important was it to break up this monopoly? Before there was a New Media, Dan Rather’s “CBS Evening News” “expos?” about George W. Bush’s National Guard service (complete with forged documents) would have gone unchallenged—and Dan Rather would still have a career. Because of New Media and outlets such as Drudge, Rather’s inept hoax was discovered—and shared with the world—within a matter of hours. …Call it what you like—the Breitbart Effect, the Having-Just-Grown-A-Pair Effect, the Other Great Enlightenment—a little candor on the part of show business conservatives would be a refreshing change from the days when being “outed” in Hollywood had more to do with what one did in the privacy of the voting booth than in the bedroom (or, this being Hollywood, in the hot tub).So who is this man who, by some accounts, may have helped jump-start this right-wing Renaissance? 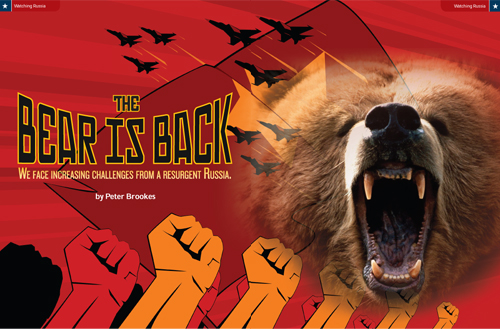 Townhall magazine contributor and national security expert Peter Brookes warns of the increasing challenges we face from a resurgent Russia in “The Bear Is Back.” Writes Brookes: “Moscow has rattled the saber, threatening to deploy missiles to their borders to shake the resolve for missile defense in Europe and NATO, especially in Warsaw and Prague.” More from the report:

Both Russia and the United States insist one Cold War was enough. But considering the frosty rhetorical winds blowing back and forth between the two former, bitter rivals the last few years, one has to wonder. Even with the Obama White House’s efforts to push a gimmicky “reset button” with the Kremlin in hopes that it will make everything better, it appears that a persistent cold front has descended on U.S.-Russia ties.Today’s Moscow is increasingly heavy-handed at home, domineering abroad and hell bent on reasserting Russia once again as a great—if not the preeminent—power on the world stage.Without question, the Bear is back.While it is not a bear of Cold War Soviet-vintage, it’s no Teddy bear, either. Russia is a big, growly grizzly willing to throw its weight around in support of the Kremlin’s interests across the globe. Unfortunately, this has rarely been good news for Uncle Sam recently. 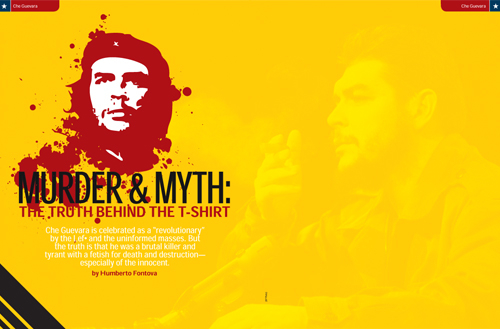 Che Guevara is celebrated as a “revolutionary” by the Left and the uninformed masses. But, as Humberto Fontova reveals in “Murder & Myth: The Truth Behind the T-Shirt,” the truth is that Che was a brutal killer and tyrant with a fetish for death and destruction—especially of the innocent. Fontova, who escaped Fidel Castro’s Cuba with his mother and siblings in 1961, offers a chilling look at the murderer whose image is plastered on the shirts of Lefties everywhere.

In a famous speech in 1961, Che Guevara denounced the very “spirit of rebellion” as “reprehensible.” “Youth must refrain from ungrateful questioning of governmental mandates,” commanded Guevara. “Instead, they must dedicate themselves to study, work and military service.” “Youth,” wrote Guevara, “should learn to think and act as a mass.”“Those who choose their own path” (as in growing long hair and listening to “Yankee-Imperialist” Rock & Roll) were denounced as worthless “roqueros,” “lumpen” and “delinquents.” In his famous speech, Che Guevara even vowed “to make individualism disappear from Cuba! It is criminal to think of individuals!”Tens of thousands of Cuban youths learned that Che Guevara’s admonitions were more than idle bombast. In Guevara, the hundreds of Soviet KGB and East German STASI “consultants” who flooded Cuba in the early 1960s found an extremely eager acolyte. By the mid ’60s, the crime of a “rocker” lifestyle (blue jeans, long hair, fondness for the Beatles and Stones) or effeminate behavior got thousands of youths yanked out of Cuba’s streets and parks by secret police and dumped in prison camps with “Work Will Make Men Out of You” emblazoned in bold letters above the gate and with machine gunners posted on the watchtowers. The initials for these camps were UMAP, not GULAG, but the conditions were quite similar.Today, the world’s largest image of the man that so many hipsters sport on their shirts adorns Cuba’s headquarters and torture chambers for its KGB-trained secret police. Nothing could be more fitting.Ignorance, of course, accounts for much Che idolatry. But so does mendacity and wishful thinking, all of it boosted by reflexive anti-Americanism. The most popular version of the Che T-shirt, for instance, sports the slogan “fight oppression” under his famous countenance. This is the face of the second in command, chief executioner and chief KGB liaison for a regime that jailed political prisoners at a higher rate than Stalin’s and executed more people in its first three years in power than Hitler’s executed in its first six. 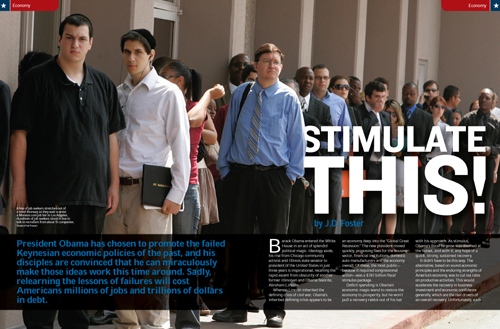 In “Stimulate This!” J.D. Foster writes that President Obama has chosen to promote the failed Keynesian economic policies of the past, and the president’s disciples are convinced that he can miraculously make those ideas work this time around. Sadly, relearning the lessons of failures will cost Americans millions of jobs and trillions of dollars in debt.

Whereas Lincoln inherited the defi ning crisis of civil war, Obama’s inherited defining crisis appears to be an economy deep into the “Global Great Recession.” …Deficit spending is Obama’s economic magic wand to restore the economy to prosperity, but he won’t pull a recovery rabbit out of his hat with his approach. As stimulus, Obama’s fiscal largesse was doomed at the outset, and with it, any hope of a quick, strong, sustained recovery.It didn’t have to be this way. The alternative, based on sound economic principles and the enduring strengths of America’s economy, was to cut tax rates on productive activities. This would accelerate the recovery in business investment and economic confidence generally, which are the real drivers of an overall recovery. Unfortunately, such effective fiscal policies are not in vogue today. 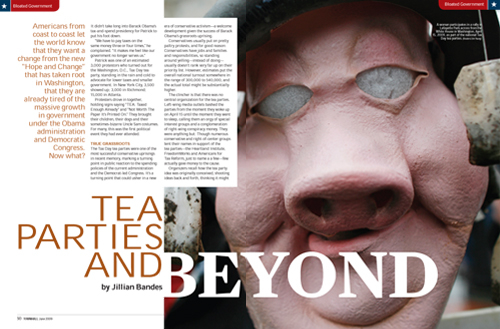 Americans from coast to coast let the world know that they want a change from the new “Hope and Change” that has taken root in Washington, that they are already tired of the massive growth in government under the Obama administration and Democratic Congress. Now what? Townhall’s Jillian Bandes reports:

It’s clear that the tea party energy is threatening to the Left. Ongoing harassment—both denying the huge turnout and deriding the efforts as anti-American—persisted long past the nationwide events. In the Chicago Tribune, Clarence Page derided fringe protestors who held signs he claimed were racist and said they represented the movement as a whole. CNN correspondent Susan Roesgen said the protests were “anti-government,” and Democratic advisor Robert Schrum said they were “insubstantial.” Obama himself was reportedly unaware that any of the events were even happening. But the effort put forth by those who attended was difficult to reconcile with “a dying brand.”

*Good riddance to Benedict Arlen*Obama plots a Supreme Court takeover*Attorney General Holder talks gun control*Mary Katharine Ham exposes what the president would like to have said to the tea party activists*Why “sin” taxes hurt sinners and saints alike*Faster growth means more freedom, but the White House’s plans threaten to slow things way, way down*Leftists blast traditional families*Rebecca Hagelin knows there’s still time to save your family and rescue our culture*Can the government and UAW really be trusted to run GM and Chrysler?*S.E. Cupp wants real substance from conservatives, not cheap imitations of the Left. . . And much more.

Subscribe to Townhall magazine today and pick your FREE book.

One of the Big Lies In the Kyle Rittenhouse Case
Townhall
Florida now has America's lowest COVID rate; Yahoo News asks if Gov. Ron DeSantis deserves any credit
Twitchy
Cruz Rips Garland Apart and Mails the Pieces Back to Him in Blistering Exchange
Redstate
EXCLUSIVE: How Long Will Vaccine Authoritarians Sit in the Cold and the Dark?
PJ Media