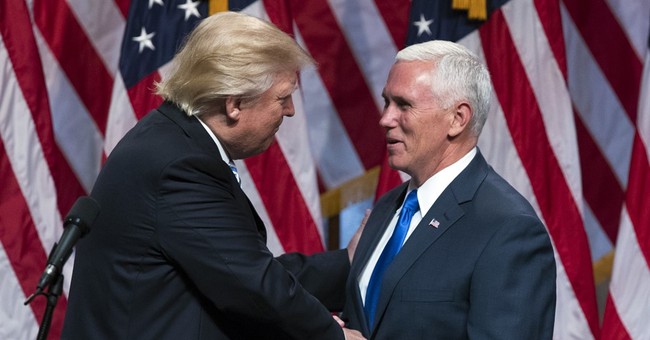 In a 60 Minutes interview this Sunday, Indiana Gov. Mike Pence assured viewers that he was supportive of Donald Trump’s policy proposals, even if he diverged from Trump in rhetoric.

Interviewer Lesley Stahl grilled Pence on whether he agreed with Trump’s more controversial actions, including his promise to bring back waterboarding, his rejection of the Trans-Pacific Partnership, and the overall tone of his campaign.

On the subject of negative campaigning, which Pence had previously spoken out against, Stahl pressed him on what he thought of Trump’s campaign.

“I think this is a good man who’s been talking about the issues the American people care about,” Pence stated.

Trump also answered, explaining that his style is to give people nicknames like “Crooked Hillary,” but he wouldn’t expect Pence to do the same.

“I call her ‘Crooked Hillary’…I didn’t ask him to do it, but I don’t think he should do it because it’s different for him,” he stated. "We're different people."

Pence parried other questions using careful language, offsetting Trump’s more inflammatory rhetoric. When asked if he, like Trump, supports waterboarding, Pence responded, “I don’t think we should ever tell our enemy what our tactics are,” and “I think enhanced interrogation saved lives.”

Juxtaposed against Trump’s more vivid answer—“We have an enemy, ISIS and others, who chop off heads, who drown people in steel cages and we can’t do waterboarding?”—Pence’s calm answer highlighted a previous point he had made: “[Trump] doesn’t speak like a politician.”

This point was made again in a discussion about TPP, which Trump had said would “rape this country,” but Pence had previously supported. Pence deferred to Trump’s opinion but again used more measured rhetoric to convey it: “What I hear Donald Trump saying is let’s look at these trade agreements and reconsider them and renegotiate them,” he said.

Both Pence and Trump denied that this position was isolationist.

Throughout the interview, Pence was a counterbalancing force to Trump’s sometimes off-the-wall rhetoric. Even the pattern of their ties reflected this dynamic, with Pence’s being a traditional, solid blue tie, and Trump’s being a flashier, striped one. They both expressed great respect for the other’s skills and character.

“I think we will have very, very good chemistry,” said Trump.