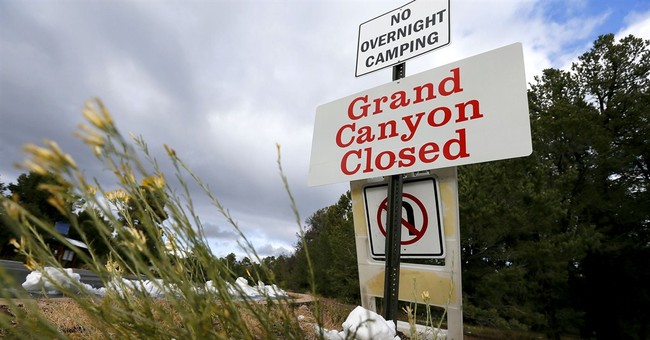 The AP's formulation of the issue is studiously "neutral": "Shutdown cost national parks at least $414 million." From reading the linked piece, one would never know (1) that Republicans actually voted to fund the parks -- it was the Democrats who refused; and (2) that the losses were due entirely to the way the Obama administration chose to handle the shutdown, seeking political support by inflicting as much pain on Americans as possible.

Republican lawmakers and local community officials in some communities affected by the shutdown are raising questions about why it took 10 days for the Interior Department to agree to [allow states to cover the costs of operating the country's 401 Park Service properties], when a precedent for such arrangements was set during the 1995 and 1996 government shutdown.

Got that? The Interior Department dawdled, so that parks would remain closed, in hopes that angry Americans would blame the Republicans. And the costs mounted.

Anyone wondering how the shutdown came to "cost" national parks (and really, us, the taxpayers!) hundreds of millions of dollars can . . . ask the Obama administration.