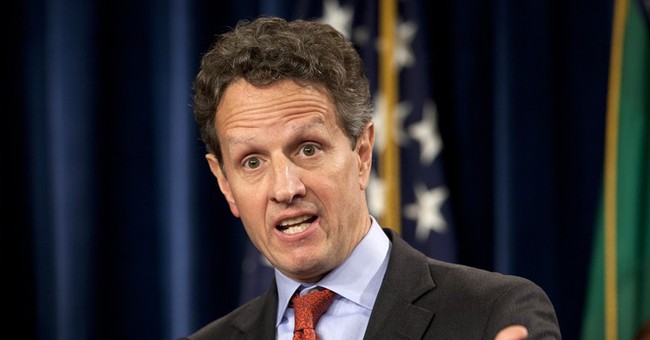 In August 2011, three days after ratings agency Standard & Poor's downgraded the triple-A credit rating of the United States, Harold McGraw -- chairman of McGraw-Hill Financial -- says something pretty unpleasant happened to him. From Bloomberg:

In his court statement, McGraw, 65, said Geithner called him on Aug. 8, 2011, after S&P was the only credit ratings company to downgrade the U.S. debt. Geithner, McGraw said, told him that S&P would be held accountable for the downgrade. Government officials have said the downgrade was based on an error by S&P.

“S&P’s conduct would be looked at very carefully,” Geithner told McGraw according to the filing. “Such behavior would not occur, he said, without a response from the government.”

Not surprisingly, Geithner and his people deny that the lawsuit has any connection with the threat. But McGraw made the allegations about the threat under oath, presumably (in a court statement). That means he'd be risking perjury if the incident didn't occur.

Obviously, there are two problems with this scenario, if true (Geithner's spokesman denies it). First, the power of the federal government isn't supposed to be wielded to intimidate or retaliate against those who are unfortunate enough to fall into disfavor with the country's rulers.

And even if the threat and the prosecution are unrelated -- and who can blame Americans for wondering, given what the administration has done to the Tea Party with the IRS and regular Americans during the shutdown? -- the very fact that the prosecution came after such threats were made will have a chilling effect on those who may have similar information to report.

That leads to the second problem: If ratings agencies are bullied and intimidated, they will not offer objective financial analysis. They will tailor their work to the dictates of the government. That might work for those in power -- but it hurts the rest of us, and the economy.