A Few Questions for the President 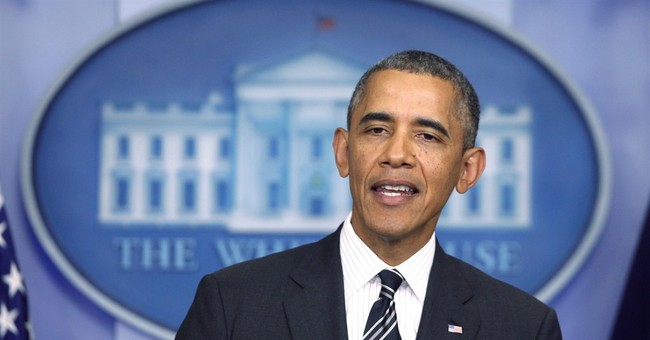 Although more Americans blame Republicans than Democrats for the government shut down, polls show that the split is not that large -- 63% blame GOP, 57% blame the Democrats and 53% blame the President, at least according to CNN.

Perhaps that's why President Obama is giving a press conference today . . . let's put it this way: He wouldn't be coming out to blame Republicans for the shut down if the GOP were in the process of totally destroying itself.

The press is not known, to put it mildly, for its aggressiveness in questioning this President. But if some of its more honest members were so inclined, they could obtain some relevant information for the American public:

(1) You were elected in 2008 on a promise to "bring Democrats and Republicans together." Now, however, you refuse even to speak to Republicans about the CR -- even when they're asking just 2 things: (1) for the removal of special ObamaCare subsidies for congressmen and their aides (and administration officials) and (2) that individuals get the same delay of the ObamaCare mandate that you've already given to businesses. Why -- given that delaying the individual mandate for just one year would save $35 billion (enough to restore the NIH sequester spending cuts for eight years, with money left over)?

(2) During the shut down, the government has closed the World War II memorial, evicted seniors from private homes on government land, closed businesses on public land, and fined a jogger $100 for being on public land. Yet you've agreed to open the mall for a pro-immigration-reform rally. Doesn't that look like you're just manipulating the shut down to help your friends and inflict maximum pain on everyone else?

(3) When will your administration be able to tell us how many people have signed up for ObamaCare?

(4) How do you justify retaining the individual mandate for individuals but waiving it for businesses? What will happen if -- because of computer errors -- people cannot purchase insurance, or think they have when they haven't? Will they still be fined?

(5) You once called the need to raise the debt limit as a "sign of leadership failure." Can you explain how your views on that have come to change?

(6) You have frightened seniors by suggesting that without a debt limit increase, Social Security checks will stop. But rather than stop their payments, couldn't you ask Harry Reid to have the Senate to take up the Full Faith and Credit Act, passed by House Republicans, that would let the Treasury pay Social Security benefit payments -- and other public obligations -- even after the debt limit has been reached?

(7) A recent poll found that most Americans think the IRS broke the law in the targeting scandal, but few expect anyone to be punished. Now, during the shut down, some Americans are complaining about the National Park Service's "Gestapo" tactics in the wake of the shut down. What can you say to convince skeptical Americans that their government is still working for them, rather than against them?

Don't hold your breath. We know how tenderly the press treats the President. But there are some honest people among them -- let's hope someone does his (or her) job.