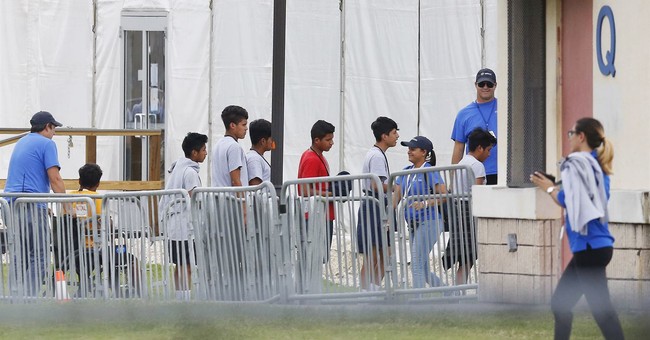 President Biden set about reversing Trump-era immigration policy successes just hours after taking office. U.S. Customs and Border Protection (CBP) officials warned that the president's reckless actions would cause a surge of unaccompanied minors along the border. And boy were they right.

Leaked Health and Human Services (HHS) docs obtained by Axios show the Biden administration is dealing with a dramatic surge of unaccompanied children at the border.

"In the week ending March 1, the Border Patrol referred to HHS custody an average of 321 children per day, according to documents obtained by Axios," the report states. "That's up from a weekly average of 203 in late January and early February — and just 47 per day during the first week of January."

According to the documents, the shelter system is already at 94 percent capacity and expected to become full later this month.

To handle the surge, HHS is opening overflow shelters and speeding up the time it takes to release children to caretakers in the U.S.

"In the week ending March 1, an average of 174 children were released from HHS custody each day. That was up from a weekly average of 90 in late January and early February, according to the documents," states the report.

As Guy wrote earlier, the surge of unaccompanied minors is just one element of the border crisis created and denied by the new administration. Biden's message to migrants, get here and you can stay, has been heard loud and clear.

Of course, the first step in solving a problem is recognizing you have one.