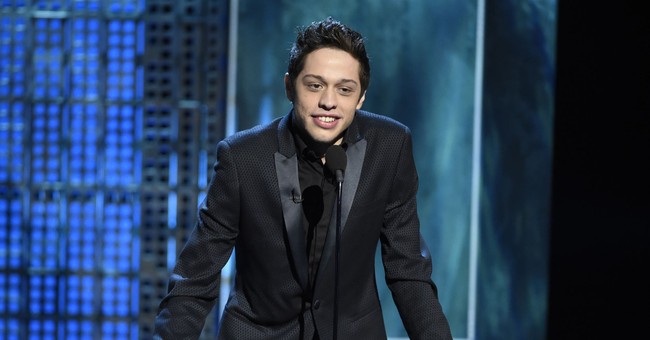 A Saturday Night Live comedian is facing backlash after poking fun at supporters of two New York City bar owners who refused to close down shop.

Protesters rallied behind two Staten Island bar owners who resisted government restrictions on indoor dining and declared their pub to be an autonomous zone. State agencies ordered the bar to close its doors and even revoked the establishment's liquor license.

Pete Davidson -- the SNL cast member who joked about Rep. Dan Crenshaw's (R-TX) eyepatch, for an eye Crenshaw lost in Afghanistan -- decided to pick on the struggling business owners and their supporters.

"I saw the protests, people were outside the bar shouting about freedom, talking to cops, chanting that they should arrest the governor so I just assumed that it was a typical last call," Davidson began innocently enough.

He then admitted that he's "kind of" against the protests before criticizing the bar owner for staying open.

"Well the bar, shockingly, is in a neighborhood with the second-highest COVID infections in all of New York," said the purported comedian. "So the rule is that they’re only supposed to let people eat or drink outside, and the owner said that no one wants to do that cuz they'll go out of business."

"One guy at the protest even gave a speech where he literally compared not being able to drink indoors to being Jewish during the Holocaust," said Davidson. "Which must have been awkward for the people there who had to suddenly pretend they believed in the Holocaust."

Holocaust deniers? Was Louis Farrakhan at the protest? Davidson is confusing Americans who want to protect their freedoms with anti-Semitic leftists.

Davidson joked about the protesters looking like "queers" before saying he thinks people should hide inside their homes until the pandemic gets better.

Twitter users pointed out the irony of Davidson complaining about people losing their livelihoods while he remains gainfully employed by Saturday Night Live.

The people who work at SNL (Pete here get's 15k an episode if I am informed correctly) shouldn't be mocking people who can't work. https://t.co/bPXjeB0ZYW

This jackass insulting people losing their businesses to ridiculous lockdowns - while a member of the least funny SNL cast in 40 years https://t.co/igQxbt02Gd

This is your reminder that SNL...basically used a loophole to get around New York's lockdown rules to film their first show.

Some animals are more equal than others. https://t.co/JMwyJXv4Pg

"We refuse to abide by any rules and regulations put forth by the Mayor of NYC and Governor of NY State," the message continued.

Despite a shutdown order from the state Health Department and multiple $1,000 fines, the bar owners continued to operate their business.