WATCH: Looter Finds Out What It's Like to Get Robbed 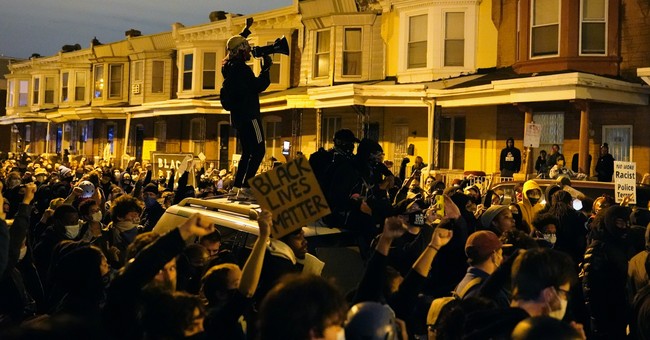 Looters have taken over Philadelphia following the death of a black man who charged at police officers with a knife in an apparent suicide by cop. For three nights, the grieving looters have taken the opportunity to steal what they can from local businesses. But after one looter bragged about the products he stole, including Plan B pills, the looter got a taste of his own medicine when another robber took his ill-begotten items away from him. Easy come, easy go.

"I got em'," a looter bragged as he held up Plan B pills to the camera.

The looter then places the pills back in a shopping cart filled with other items and continues down the street. Moments later, the same man is seen in the video walking with another man, crying as the duo recounts how the pair fell victim to fellow robbers.

Looting has been a hallmark of Black Lives Matter protests and leftwing riots over the past several months. While some public health experts and many in the media have cheerleaded government lockdowns and bans on large gatherings and church services, the same people have hypocritically and tellingly remained silent or, worse, endorsed the protests as if the virus can't spread among leftists.

In August, taxpayer-funded National Public Radio promoted a book that justified violent rioting. According to the author, things like looting and arson are nothing more than pragmatic ways of obtaining wealth redistribution and improving life for the working class. The author apparently believes America would be a much better society if everything was on fire all the time and people simply stole whatever they wanted.

But as the looter in the video found out the hard way, crime doesn't pay.