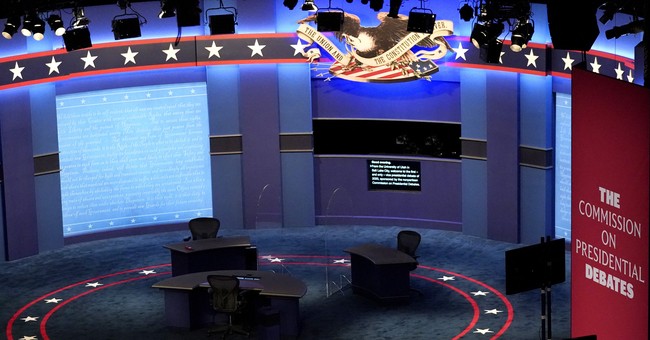 You knew it was coming. After toying with the idea of giving Trump-hating moderators a button to cut Trump's microphone whenever they feel like it and canceling the agreed-upon in-person debate to propose a virtual town meeting that would only help the liberal media further stack the deck against President Trump, the Committee on Presidential Debate (CPD) acknowledged on Friday that there will be no second presidential debate on Oct. 15.

"It is now apparent there will be no debate on October 15, and the CPD will turn its attention to preparations for the final presidential debate scheduled for October 22," CPD stated in a press release.

According to CPD, the Oct. 22 debate will be held in-person at Belmont University in Nashville, Tennessee as originally planned. The debate will be divided into six 15-minute segments and moderated by Kristen Welker of NBC News.

It is very clear the CPD is doing everything they can to help Biden win the election. By canceling the second in-person debate, the CPD robbed the president of another opportunity to address voters while Biden is allegedly ahead in the polls. The moderator, Kristen Welker, is a left-wing activist but, unlike Scully, took the brazen step of deactivating or deleting her Twitter account in an apparent effort to hide her anti-Trump bias.

It's no mystery why President Trump came out swinging at the first debate. These debates are two against one, and the entire CPD is filled with Democrats and Never Trumpers.

As Cortney reported earlier, C-SPAN host Steve Scully, a former Biden intern, was set to moderate the second presidential debate. Perhaps Trump dodged another bullet there because Scully is now come under fire after tweeting what appears to be a private message to Trump-hater Anthony Scaramucci asking for advice on handling Trump. Scully claims he was hacked. Good riddance.