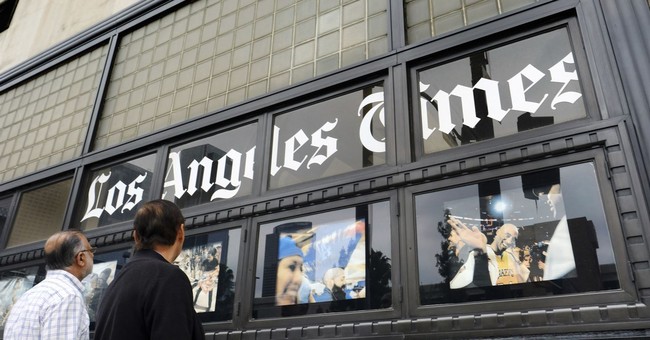 Liberals are beaming with glee that President Trump has contracted the Wuhan coronavirus. Still shellshocked from 2016, lefties aren't believing the polls this time around and want to make absolutely sure President Trump won't be around for another four years. The left has been wishing death to the president all day on social media.

Similarly, the Los Angeles Times is so excited about the president's diagnosis that the newspaper is defending Democrats and those on the left for not rallying behind the president following news of his positive test results.

Trump may not have been running around hysterically warning about the Wuhan coronavirus, but he wasn't telling people to come on down to Chinatown either or sending COVID patients into nursing homes. Would the LA Times use the same headline if House Speaker Nancy Pelosi or New York Gov. Andrew Cuomo caught the rona? What if Pelosi caught the virus at that closed-down hair salon she was seen walking around in maskless? Or what if Gov. Cuomo had caught the virus from his brother Chris Cuomo when Chris was violating his quarantine?

Or what about Joe Biden? A maskless Biden was caught whispering in a maskless Anderson Cooper's ear during a recent CNN Town Hall event. Would the LA Times be arguing the country shouldn't rally behind Joe Biden because he downplayed the virus? Biden opposed the president's early travel restrictions on China, which have been credited with saving millions of American lives.

Even with the proper precautions taken throughout the president's rallies and appearances -- including temperature checks, masks, and hand sanitizer for every person -- there is always the risk of illness. The president understood that stopping the spread of a novel virus was never possible.

The president flattened the curve and is smart enough to know that there is still a risk for every person, no matter who they are, or who they plan to vote for.