WATCH: SpaceX Astronauts Splash Down in the Gulf of Mexico 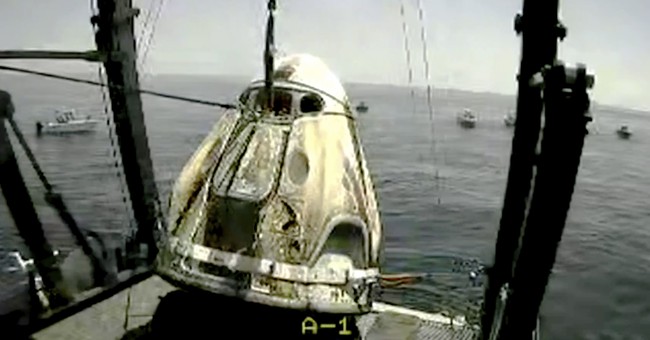 Back in May, NASA and SpaceX launched the first space shuttle on American soil in almost a decade. And on Sunday, the SpaceX Crew Dragon splashed down in the Gulf of Mexico completing a landing process some 19-hours long. According to NASA, it was the first splashdown of an American crew spacecraft in 45 years.

NASA astronauts Bob Behnken and Doug Harley completed their historic two-month trip to space, part of a renewed commitment to space exploration under the Trump administration. Under Trump, the National Space Council was reestablished, NASA received its largest budget in decades, and the newly minted Space Force became the sixth branch of the United States military.

President Trump tweeted a video showing the SpaceX capsule landing in the Gulf of Mexico on Sunday.

Restoring America's presence in space is a key goal of the Trump administration, and Sunday's return of the SpaceX crew is a milestone that has been years in the making. NASA partnered with SpaceX, a private company run by Elon Musk, to send American astronauts back into space. The successful partnership proves American innovation and determination have no limits.

During his time in office, President Obama unilaterally cut funding to NASA programs and scrapped the Space Shuttle and Constellation programs. The latter program was aimed at sending Americans to the moon by 2020.

Elon Musk welcomed the astronauts back to Earth.