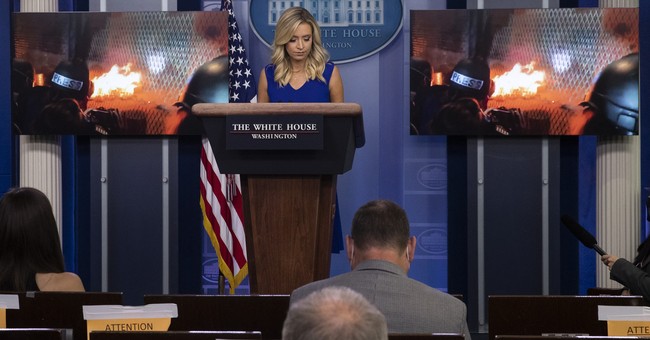 To shield their viewers from acknowledging a reality that would pop their liberal bubbles of disinformation, the cable networks cut away from the White House press briefing on Friday as soon as Press Secretary Kayleigh McEnany began playing clips of so-called peaceful protesters engaging in wanton violence and wishing death to police officers and their families.

Do liberals ever find it odd that their networks suddenly stop coverage of live press briefings? To be fair, Fox News also cut away while the video played. But unlike the other networks, Fox hasn't been denying the existence of widespread violence across the nation over the past several weeks.

Perhaps the networks were worried about the violence being too graphic for their viewers, but that didn't seem to be a concern when the networks played the arrest of George Floyd on an endless loop.

At any rate, here's the video played at the press briefing showing just some of the violence committed by rioters in Portland, in case you missed it.

Here's the video of the riots in Portland that the media does not want you to see.

This is what Joe Biden referred to as "peaceful" and blamed law enforcement for the violence. pic.twitter.com/490zQDI8Py