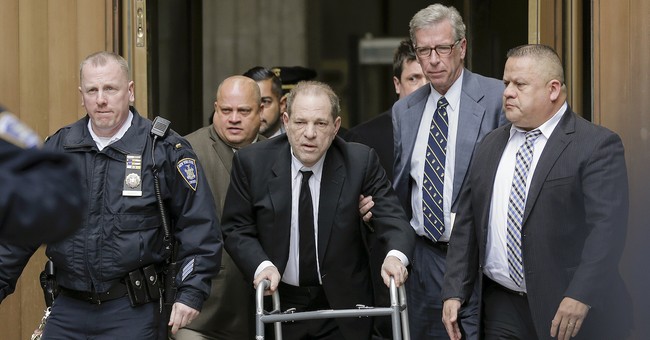 Convicted rapist Harvey Weinstein has tested positive for the Wuhan coronavirus. The 68-year-old, who is reportedly experiencing several health disorders, is currently in isolation at New York's Wende Correctional Facility. Individuals over the age of 60 who have underlying health issues are said to be most vulnerable to the effects of the COVID-19 virus.

Weinstein was sentenced earlier this month to 23 years behind bars after being found guilty of third-degree rape and first-degree sexual assault. Weinstein was transferred from Rikers Island Jail in New York City to Wende Correctional Facility for processing into the state's prison system, CNHI state reporter Joe Mahoney reported. It was at the Wende Facility, during medical and mental examinations, that Weinstein tested positive for the Wuhan coronavirus. One other inmate at the Wende facility has also tested positive for the virus. Harvey Weinstein is currently in isolation. Variety reports the New York State Department of Corrections and Community Supervision confirmed that out of 43,000 inmates statewide, only two cases at the Wendy facility have been confirmed.

The disgraced movie mogul reportedly suffers from diabetes, hypertension and other ailments. Weinstein was accused of trying to gain the jury's sympathy by using a walker throughout his trial. Weinstein was involved in a car accident in Aug. 2019 and underwent back surgery to alleviate the pain he was reportedly experiencing as a result of his injuries.

Once a powerful Hollywood mogul, Harvey Weinstein was accused by multiple women of rape and sexual assault over a period spanning a number of years. The accusations spawned what became known as the "Me Too" movement.

Share this on Facebook
Tweet
Biden Urges Action on Climate Change: 'We Don't Have Much More Than 10 Years, For Real'
Leah Barkoukis
Oh, So That's How 350,000 California Recall Votes Vanished from CNN's Vote Tally
Matt Vespa
How Many Afghan Refugees Are Headed to Your State? Here Are the Numbers.
Leah Barkoukis
Obama DHS Sec. Johnson Says This Is the Most Pressing Threat Against the US