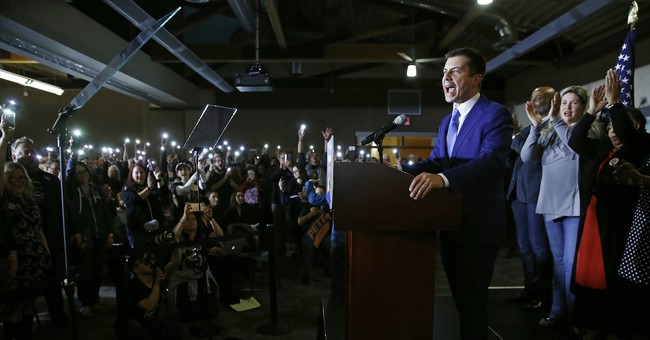 It did not take long for the former mayor of South Bend, Indiana, Pete Buttigieg, to target the winner of Saturday's Democratic caucuses in Nevada. Socialist Bernie Sanders is projected to win a decisive victory in the Silver State, sending the media into a frenzy over renewed concerns that nominating a socialist would all but guarantee a second term for President Trump. In a speech following his apparent loss in Nevada, Buttigieg told a crowd of supporters that nominating Bernie Sanders would not sit well with the American people.

Buttigieg said he believes the best way to defeat President Trump "is to broaden and galvanize the majority that supports [Democrats] on the critical issues."

"Senator Sanders believes in an inflexible, ideological revolution that leaves out most Democrats, not to mention most Americans," Buttigieg warned. "I believe we can defeat Trump and deliver for the American people by empowering the American people to make their own health care choices with medicare for all who want it. Senator Sanders believes in taking away that choice, removing people from having that option of a private plan and replacing it with a public plan whether you want it or not. ... but that is different from Senator Sanders' vision of capitalism as the root of all evil that would go beyond reform and reorder the economy in ways that most Democrats, not to mention most Americans, don't support."

It's going to be harder for Pete Buttigieg to say most Democrats don't support the Vermont socialist the longer Sanders remains the party's front-runner. Buttigieg called for an end to the so-called "viscousness and bullying" of the Trump era, warning that a Sanders' presidency would only continue the toxicity and polarization of our nation's politics.

"[A]nd that is a real difference from Senator Sanders' revolution with the tenor of combat, and division, and polarization leading to a future where whoever wins the day nothing changes the toxic tone of our politics," Buttigieg said.

While addressing his supporters in Las Vegas, @PeteButtigieg congratulated Sen. @BernieSanders on his win, but went on to criticize the senator's policies and "revolution," saying it has a "tenor of combat and division and polarization..." pic.twitter.com/TaBV9tAQ3a