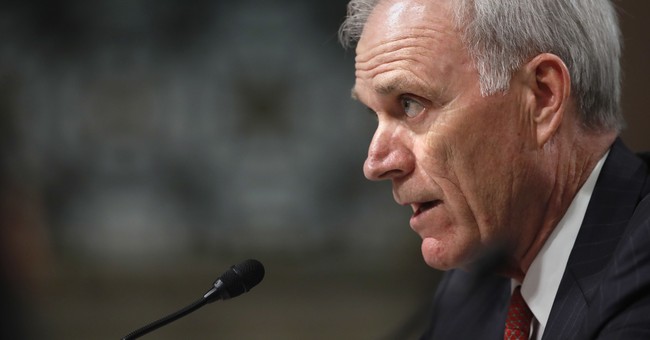 Most insubordinate employees would quietly disappear after publicly humiliating themselves and being fired. Not former Secretary of the Navy Richard Spencer. After President Trump canned Spencer for repeatedly working against the president's wishes, Spencer penned an op-ed for The Washington Post titled, "Richard Spencer: I was fired as Navy secretary. Here's what I've learned because of it." In the op-ed, Spencer appears to have learned nothing from his termination and confirms everything Trump said about him and the deep state.

"It is highly irregular for a secretary to become deeply involved in most personnel matters," Spencer acknowledges. The former Navy secretary then goes on to say how he inserted himself into the case of Chief Petty Officer Eddie Gallagher in order to undermine the president's wishes.

"Before the trial began, in March, I received two calls from the president asking me to lift Gallagher’s confinement in a Navy brig," Spencer writes. "I pushed back twice, because the presiding judge, acting on information about the accused’s conduct, had decided that confinement was important."

Isn't the chain of command something they teach in the Navy? Spencer ignored the president of the United States twice because he thought some judge's decision was more "important"? Trump must be so used to dealing with the deep state that he didn't fire the insubordinate Navy secretary right then and there.

"Eventually, the president ordered me to have him transferred to the equivalent of an enlisted barracks," writes a defeated Spencer.

When Chief Gallagher was acquitted on all but one charge of posing with a dead terrorist's corpse, something I feel we should encourage, Gallagher was demoted to officer and requested to voluntarily retire from the Navy. The former Navy secretary writes that there were important questions for the Navy to consider, like should Chief Gallagher retire at his current rank, should he be discharged honorably and should he be allowed to keep his Trident pin.

Fearing the president might catch on that Spencer was trying to punish the Navy SEAL after he was just cleared of any real wrongdoing, the now-fired Navy secretary had the audacity to write the president and ask him not to get involved in the Navy's further punishing of Chief Gallagher.

"On Nov. 14 ..." Spencer recalls, "I sent him a note asking him not to get involved in these questions." By Spencer's own version of events, this is now the third time the secretary of the Navy had rebuffed the commander-in-chief.

"This was a shocking and unprecedented intervention in a low-level review," writes an angry Spencer. "It was also a reminder that the president has very little understanding of what it means to be in the military, to fight ethically or to be governed by a uniform set of rules and practices."

In addition to the chain of command, add civilian control over the military to the list of things the former Navy secretary doesn't understand. The founding fathers put a civilian in charge of the military to prevent power-hungry Navy secretaries like Richard Spencer from becoming tyrants who mistakenly believe they answer to no one. Our founding fathers wanted to make sure our number one military leader was held directly accountable to the American people every four years.

In Spencer's worldview, he doesn't answer to the duly elected president. The deep state answers to nobody. "Given my desire to resolve a festering issue," a hard-headed Spencer continues, "I tried to find a way that would prevent the president from further involvement while trying all avenues to get Gallagher’s file in front of a peer-review board."

Spencer then admits to making one mistake: "I also began to work without personally consulting Defense Secretary Mark T. Esper on every step. That was, I see in retrospect, a mistake for which I am solely responsible." You think?

Then, on Nov. 19, Spencer brazenly told White House staff of his plan to thwart the president's involvement by sending the case of Chief Gallagher to an independent review board in the Navy.

"But the question was quickly made moot," Spencer laments. "On Nov. 21, the president tweeted that Gallagher would be allowed to keep his pin — Trump’s third intervention in the case."

Showing how irredeemable of a deep stater Spencer was, the recalcitrant former Navy secretary writes, "I recognized that the tweet revealed the president’s intent. But I did not believe it to be an official order, chiefly because every action taken by the president in the case so far had either been a verbal or written command."

"The rest," Spencer concludes, "is history. We must now move on and learn from what has transpired. The public should know that we have extensive screening procedures in place to assess the health and well-being of our forces. But we must keep fine-tuning those procedures to prevent a case such as this one from happening again."

So, Spencer gets fired after publicly and spectacularly disobeying the president and the only lesson he draws from the entire episode is for the public to know that we must fine-tune our "screening procedures" to better "assess the health and well-being of our forces?" What did Chief Gallagher do to the deep state to tick them off so much?

I do hope the president screens and better assesses the competence of his appointments to make sure deep staters like Richard Spencer never subvert the will of a duly elected president ever again.