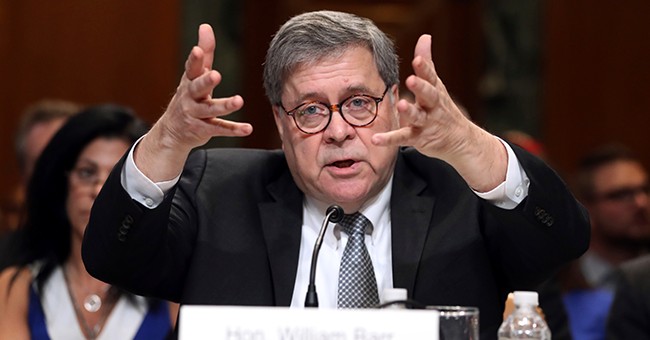 In a stirring speech before the Federalist Society on Friday, Attorney General William Barr laid waste to "the Resistance" and accused the president's opponents of destroying the rule of law.

"Immediately after President Trump won election," Barr recalled, "opponents inaugurated what they called 'the Resistance,' and they rallied around an explicit strategy of using every tool and maneuver to sabotage the functioning of the executive branch and his administration."

"Now resistance is the language used to describe insurgency against rule imposed by an occupying military power," Barr noted. "It obviously connotes that the government is not legitimate. This is a very dangerous and indeed incendiary notion to import into the politics of a democratic republic."

Instead of seeing themselves as the loyal opposition, a tradition observed in this country for over 200 years, Barr said the "[Resistance] essentially see themselves as engaged in a war to cripple by any means necessary a duly elected government."

Barr cited Senate Democrats as a prime example of this unprecedented abuse of power to thwart the president from forming a functioning executive branch. Barr said through September of this year, the Senate has been forced to invoke cloture on 236 of Trump's nominees. Under Obama, the Senate only invoked cloture 17 times over the course of 8 years. During Bush's first term, only 4 times.

While Barr recognizes the Congress has some implied oversight authority related to its legislative powers, Barr said "the sheer volume of what we see today, the pursuit of scores of parallel investigations through an avalanche of subpoenas, is plainly designed to incapacitate the executive branch and is indeed touted as such."

"The fact of the matter is that in waging a scorched-earth, no-holds-barred war of resistance against this administration, it is the left that is engaged in the systematic shredding of norms and undermining the rule of law. ..." Barr continued. "They are willing to use any means necessary to gain momentary advantage in achieving their end, regardless of the collateral consequences and the systemic implications. ... and yet we here them irresponsibly tabling proposals to do away with the electoral college or to pack the courts. Who's shredding Constitutional norms?"

Barr concluded his speech by criticizing activist judges who use nationwide injunctions to block the president's agenda.

In summary, Barr continued, "No other president has been subjected to such sustained efforts to debilitate his agenda."