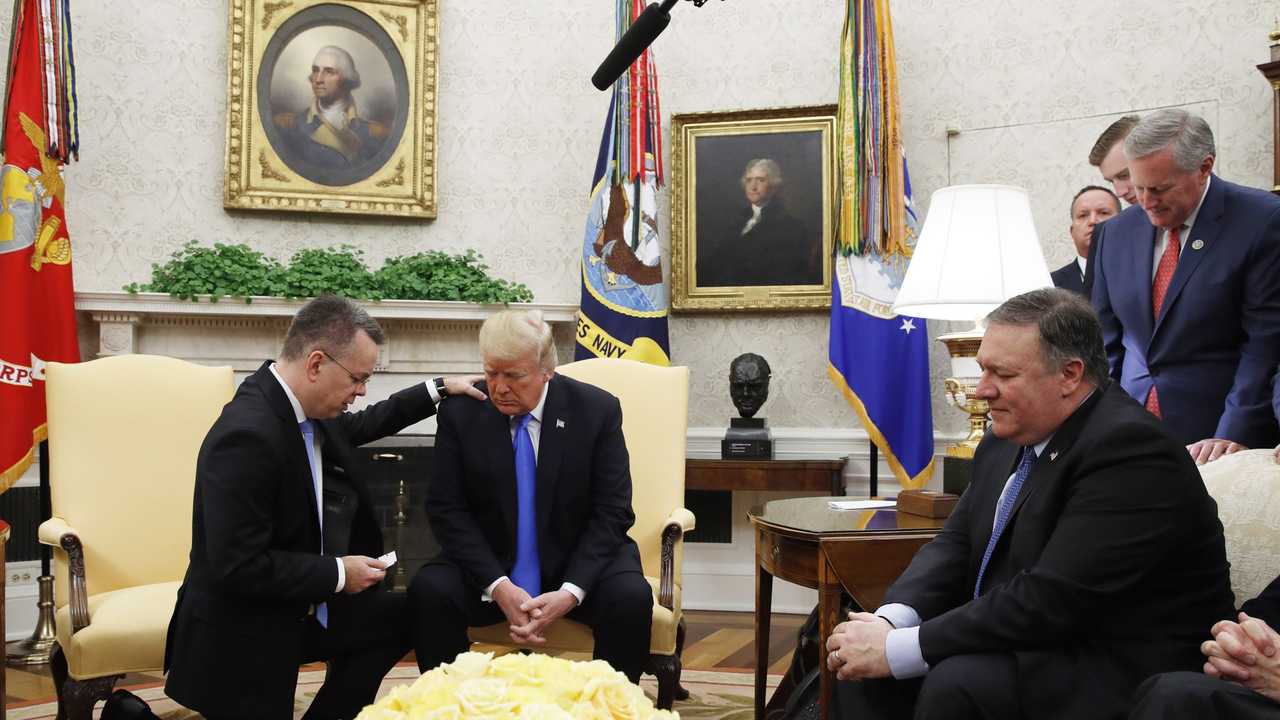 Pastor Brunson recently spoke to Townhall about his new book, “God’s Hostage: A True Story About Persecution, Imprisonment, and Perseverance.” In the interview, Pastor Brunson talks about the unprecedented steps taken by President Trump to secure the pastor's release from a Turkish prison, the recent events in Turkey, and his concern for America today.

“There was a lot of pressure high up from Trump, the administration, from Congress,” the pastor recalls about the efforts to secure his release. “It was really unprecedented the level of involvement and engagement.”

Turkey’s economy was already in a precarious state when the Trump administration raised tariffs on steel and aluminum. “What really hit hard were the tariffs,” Brunson says. “Turkey had structural problems, but that’s what tipped it.”

Does Brunson believe he would be free if President Trump hadn't been in the White House?

“God could have found another way,” he says, “but there’s no question God used President Trump. I think without the measures he took, the Turkish government would have been happy to keep me for a long, long time.”

President Erdogan finally relented, and Pastor Brunson was set free in October 2018. And just hours later, Andrew and Norine were sitting in the White House talking to President Trump himself.

For more than a year now, the Brunsons have been living in America. “We love our country,” Brunson tells me, but he has noticed some changes in the 25 years that he’s been gone. “What really stands out to me is the increasing hostility in the business, political, and media classes toward open displays of Christian faith,” Brunson observes. “The environment has just become more hostile.”

While the pastor doesn't consider himself a culture warrior, he can’t help but notice the increasing demands imposed upon Christians by members of the progressive community.

“My impression is,” Brunson says, “whereas before there was a demand that evangelical Christians be tolerant of a number of things, that’s no longer sufficient. Now, it’s ‘you must celebrate the values of the progressive community,’ ‘you must celebrate these things.’ It’s not enough to say, ‘don’t bother us,’ or ‘leave us alone,’ or ‘tolerate us.' It’s, ‘you must approve!’"

He's worried about his children’s generation. A recent poll shows millennials are the first non-Christian-majority generation in U.S. history. The pastor says he hopes “to encourage younger Christians to stand without apology for their faith even if it costs them because it’s necessary, and Jesus is even worthy of this.”

Asked about the ongoing situation in Syria and Trump’s decision to withdraw U.S. troops, Brunson believes that "it’s going to get much worse before it gets better.” He thinks it’s too late now for the president to reverse course, even if he wanted to.

"So now our focus in praying is asking God to take this terrible mess and tragic situation and turn its direction and bring something good out of it.”

Andrew and Norine say they still have a missionary calling and a place in their hearts for the Muslim world, but they have no immediate plans to go there.

When the pastor was arrested in Turkey, he feared that his wife Norine would simply go back to living a normal life without him. While he never questioned her commitment to their marriage, he understandably expected life outside his prison cell to continue in his absence. But the pastor seems to have underestimated his wife. Norine reassured her husband, telling him they would “go back to normal life together.”

And while the couple has been too busy to consider their lives completely back to normal, Norine says they now enjoy the little things they missed so much when the pastor sat in a Turkish prison cell.

“Having coffee together, breakfast together," Norine says. "Taking a walk – things like that."